Vegan dairy brand Silk is launching a range of oat milk, called “Oat Yeah.” The new non-dairy beverage is set to debut in major stores and supermarkets, including Walmart, Target, Sprouts, and Publix.

Silk’s Oat Yeah comes in three “oat-mazing” flavors with names that sound like an episode of “Friends“: The Plain One, The Chocolate One, and The Vanilla One. All three varieties are made from non-GMO oats and are free from soy, artificial colors and flavors, and cholesterol.

According to Silk, it’s also low in sugar; one serving of The Plain One contains 90 calories and 4 grams of sugar. Plus, it’s fortified with plant-based vitamin B12 which can be tricky to get on a vegan diet. 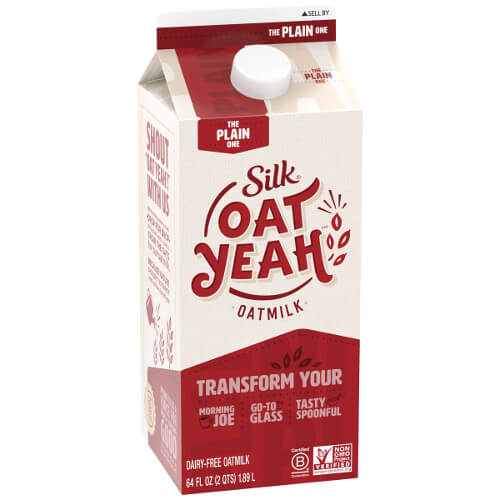 The Rise of Oat Milk

Plant-based milk is big in the U.S., as more consumers turn to dairy-free for reasons related to health, sustainability, or animal welfare. According to data from the Good Food Institute, vegan milk sales account for 13 percent of total retail milk sales nationally and the market itself is worth $1.8 billion.

While almond milk has been a top choice among American consumers, oat milk has become a hot commodity over the past couple of years. According to Pinterest, oat milk was its top food trends of 2018, with a 186 percent spike in searches.

Most of the new non-dairy craze can likely be credited to Swedish brand Oatly, which has been making oat milk since the ’90s. It made its U.S. debut in 2016 and was met with high demand in cafes and grocery stores. Its popularity has also led to shortages and some online price hikes. A single carton of Oatly Barista Edition currently costs $25 on Amazon.

But, it seems that the great oat milk shortage of 2018 may soon come to a close. Oatly is hoping to help meet demand by opening its first U.S. facility in New Jersey. Quaker, famous for its oat, is launching its “Oat Beverage” made from oat bran in early 2019. And soon enough, you’ll be able to pour yourself a glass of Silk’s “Oat Yeah.”

According to Silk, all three varieties of Oat Yeah will be available in stores starting January 2019.