Need to freshen up your breath after plowing through a bowl of vegan pesto pasta at By Chloe? The international vegan fast-casual chain has partnered with Simply Gum for a limited-edition gum flavor, inspired by the brand’s best-selling cold-pressed juice, The Merry Prankster. No need to be wary about ordering the garlicky meatball sub; chew on a piece of this natural vegan gum and no one will be able to tell (or smell).

The new Simply Gum features a fusion of flavors. It’s fresh, light, slightly sweet, and unique among the countless renditions of mint and fruit-flavored gum. The mix includes notes of watermelon, apple, prickly pear, and lemon. The goal was to replicate the refreshment of a cold-pressed juice, in gum form.

Simply Gum approached the vegan chain to initiate this partnership. According to NOSH, the company’s CEO, Caron Proschan, said that they targeted By Chloe “because of the synergies between the two brands’ missions, ingredients, and aesthetics.” Like By Chloe, the brand focuses on simple, wholesome, vegan ingredients, abstaining from all artificial flavors, preservatives, and synthetics. Proschan also mentioned, “We are finding it’s a great way for us to gain exposure to new audiences.” 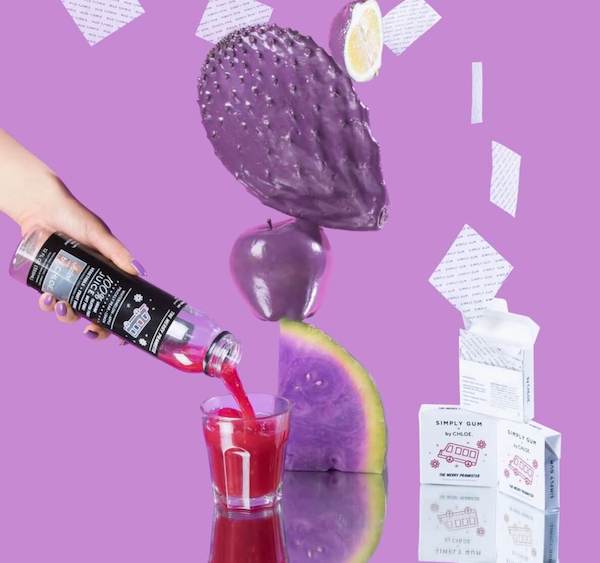 This partnership is part of Simply Gum’s expansion efforts. The business will launch its new breath mint line in all US Whole Foods this June. Shortly after, the brand will introduce new “trendy” flavor combinations to the market, such as turmeric and cayenne. Beyond the limited-edition By Chloe flavor, current offerings include cinnamon, fennel, mint, ginger, coffee, and maple.

There’s no telling how long the flavor lasts, but its limited availability is certain. The Merry Prankster Gum will only be sold online and at 11 By Chloe locations this spring.

By Chloe has a reputation for partnering with like-minded companies, often providing a vegan option when they are lacking. Last February, the brand worked with Jars by Dani to create a limited-edition Chloestess Jar. The mason jar dessert was layered with the restaurant’s signature Chloestess chocolate cake, chocolate ganache, chocolate chip cookie dough, vanilla frosting, and hot pink sprinkles. More recently, the London location entered into a partnership with food service delivery company, Deliveroo, to offer a vegan poutine dish in honor of the upcoming royal wedding between Meghan Markle and Prince Harry.