“I am ✨DELIGHTED✨ to announce that the @VeganLadyboss website is up!,” Dee wrote. “Never would I have imagined that we would grow so quickly or even have a website (hello, this started with 5 people eating takeout in my apartment!).”

I am ✨DELIGHTED✨ to announce that the @VeganLadyboss website is up! Never would I have imagined that we would grow so quickly or even have a website (hello, this started with 5 people eating takeout in my apartment!). For everyone wanting to learn more about #VeganLadyboss, to attend or organize a meeting, it’s all there. ?? Check it out at www.veganladyboss.com !!! ?? *link in bio!*

The organization is helmed by Dee, who acts as Founder and Organizer, and Adri Suarez, the marketing director for the Brooklyn-based vegan restaurant group Champs Empire (which includes Champs Diner, Screamers Pizzeria, and Haymaker’s Corner), who acts as Community Director.

According to the website, Vegan Ladyboss was first launched by Dee in November of 2016 in order to “offer a structure that connects, supports and empowers vegan women.” In late July, the official Vegan Ladyboss Instagram was launched, featuring portraits of women within the movement. 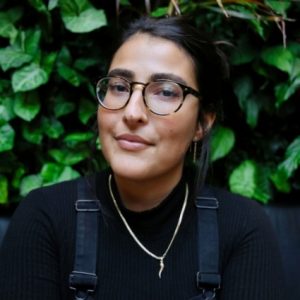 However, Dee soon realized that the high demand for a community like Vegan Ladyboss “necessitated a new structure for vegan women to organize worldwide,” and so she worked to find a solution that would allow vegan women to connect with each other.

Vegan Ladyboss aims to create “a safe space for vegan women (trans included, of course) to gather and build each other up in their professional and activism careers.” The site also clarifies that “the “#boss” in Vegan Ladyboss doesn’t refer to managing people– it refers to being the boss of your life, lady!”

Currently, there are three chapters of Vegan Ladyboss in the United States: New York City, Colorado, and Dallas. Anyone who is vegan and identifies as a woman is welcome to start their own local chapter.  Although Vegan Ladyboss is not a non-profit, they do not accept sponsors and all meetings must be free of charge.

To learn more about Vegan Ladyboss, visit their official website.