American rapper Snoop Dogg performed on stage at the Environmental Media Association (EMA) Honors Gala over the weekend; on the screens behind him, the logo for Beyond Meat was emblazoned.

Beyond Meat, best known for its vegan “meaty” Beyond Burger, says it wants to transform how the world views protein and plant-based food. A growing number of scientific leaders and experts agree that current livestock production methods are the single-biggest detriment to the environment. Some estimates suggest meat production is responsible for as much as 51 percent of all greenhouse gas emissions. 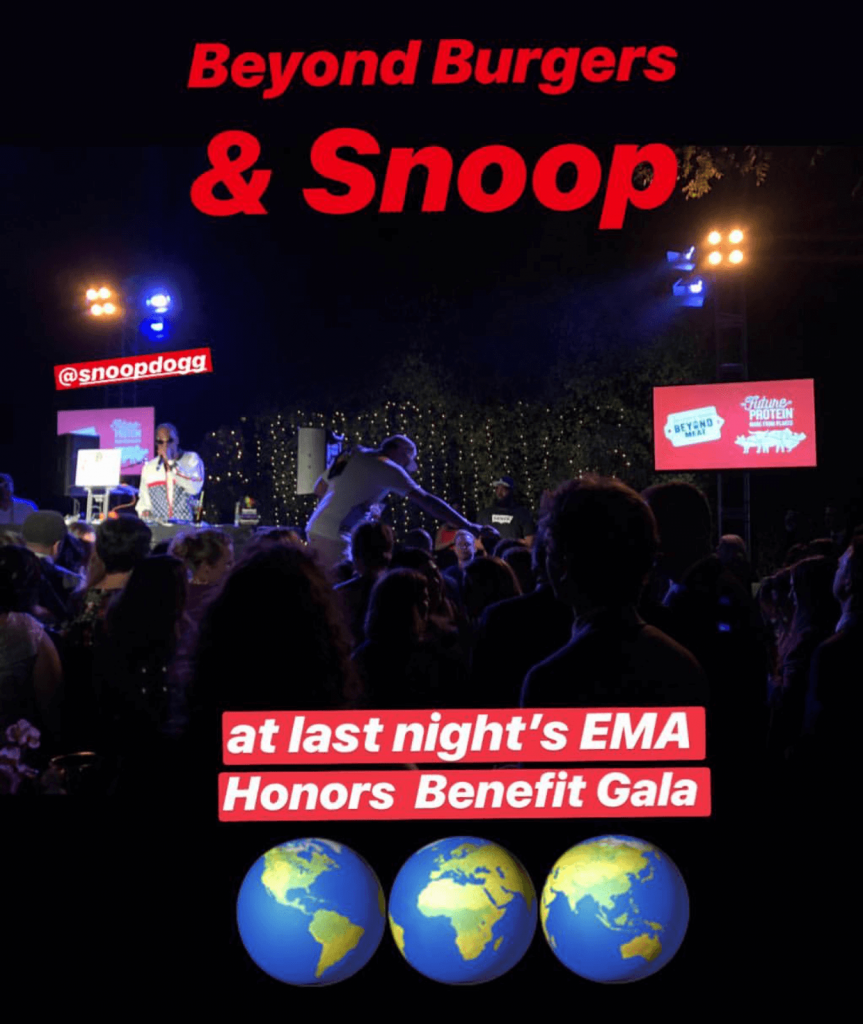 This year, the EMA Gala honored a number of celebrities who “are consistently advocating for our planet.” Hosted by “Grey’s Anatomy” star Ellen Pompeo, the gala awarded Jane Fonda with the Female EMA Lifetime Achievement Award, Elizabeth Olsen with the EMA Futures Award, Ray Halbritter with the Male EMA Lifetime Achievement Award, and Mike Sullivan with the Corporate Responsibility Award.

The EMA, according to its website, “has grown into a diverse subsection of entertainment industry tastemakers, entrepreneurs in finance and technology, and green icons dedicated to the mission of promoting environmental progress.” It continues, “EMA is a movement powered  by celebrity role-modeling, campaign work, social media messaging, year-round programs, and three large-scale annual events: The EMA Awards, EMA Honors Benefit, and EMA Impact Summit.”

In attendance at this year’s Honors Benefit event were actors Joanna Garcia, Nicky Whelan, and Wendy Malik, as well as of course, Snoop Dogg, who provided support for the cause with a musical performance.

Whilst Snoop Dogg evidently cares about environmental issues due to his presence at the event, it is not clear if the rapper currently follows a vegan diet. He has dabbled with in plant-based food before. Back in 2013, the rapper hosted vegan producer and activist Russell Simmons on GGN (Snoop Dogg’s Double G News Network), who explained the detrimental environmental consequences of animal agriculture. Simmons impressed the musician with some vegan pastrami on the show which Snoop Dogg initially thought was real meat.

Further, in 2016 during an appearance on the late night show “Jimmy Kimmel Live,” Snoop Dogg learned the truth about how hot dogs are made after Kimmel showed him a short series of video clips. The rapper then announced he would never eat one again. “If that’s how they make hot dogs, I don’t want one.”

While Beyond Meat has yet to launch a vegan hot dog, the company did recently launch three vegan sausages. The meatless sausages are made from pea protein and get their signature “snap” from an alga casing. Like its vegan Beyond Burger, the vegan Beyond Meat Sausages don’t lack in protein. They actually contain about two grams more than the same size traditional sausage, but the environmental impact of the vegan food is significantly smaller. It’s a core driver for the brand.

“We believe there is a better way to feed the planet,” Beyond Meat says on its website. “Our mission is to create mass-market solutions that perfectly replace animal protein with plant protein. We are dedicated to improving human health, positively impacting climate change, conserving natural resources and respecting animal welfare.”