Snoop Dogg has gone “plant-based,” and he loves it.

The award-winning rapper is also apparently friends with vegan Ultraman and Ironman athlete, author, and podcast host, Rich Roll. “No point in even trying to act cool in this situation,” Roll wrote in an Instagram post where he posed with Snoop Dogg.

“This was intended as a sort of double entendre pun on snoop’s affinity for a certain plant, upon which so much of his life is based,” Rich Roll told LIVEKINDLY. While Snoop Dogg may not be “plant-based,” he loves a good vegan burger.

The pair attended the fifth annual NRF Foundation Gala. According to the website, the NRF Foundation is the philanthropic arm of the National Retail Federation, which aims to provide job-seekers of all ages and backgrounds with education, training, and career experiences. The gala took place during NRF 2018: Retail’s Big Show in NYC, which happened over the weekend. 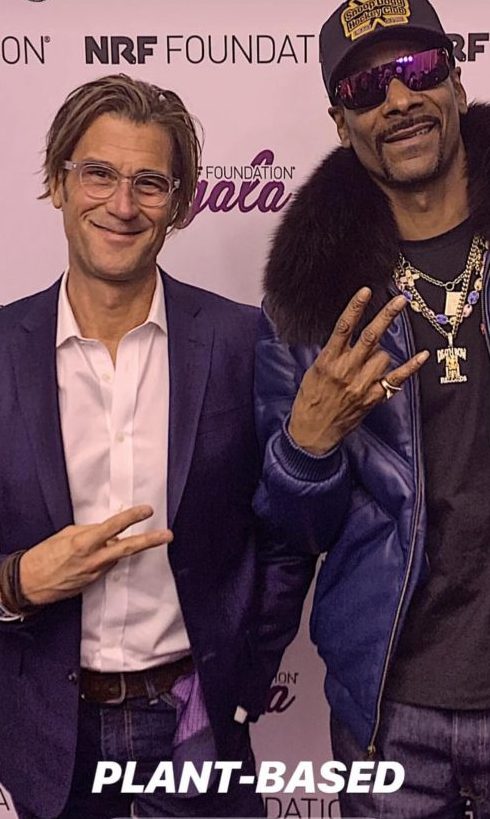 Although Snoop Dogg released a cookbook late last year that featured animal products, many have speculated about his diet. The rapper performed at the Environmental Media Association Honors Gala last June to a backdrop advertising plant-based protein brand Beyond Meat.

Prior to that, in 2013 record producer, entrepreneur, and “The Happy Vegan” author Russell Simmons informed Snoop Dogg of the environmental impact of animal agriculture. Simmons shared vegan pastrami with the rapper, which he thought tasted like real meat.

Snoop Dogg was also surprised by how hot dogs are made during a 2016 appearance on the late night show “Jimmy Kimmel Live.” After watching a series of video clips, he said, “If that’s how they make hot dogs, I don’t want one.”

Martha Stewart even tried to convince him to embrace vegetarian food in an episode of their VH1 cooking show, “Martha & Snoop’s Potluck Dinner Party,” which aired last August.

While Snoop Dogg hasn’t made any announcements about a lifestyle change, it may be due to the health benefits of a plant-based diet. A growing body of medical studies indicate that red and processed meats such hot dogs, bacon, and cold cuts can increase the risk of heart disease, certain forms of cancer, high blood pressure, and type-2 diabetes. Conversely, a plant-based diet has been shown to lower the risk and in some cases, reverse or reduce the symptoms, of several chronic health conditions.

A number of celebrities such as Black Eyed Peas frontman Will.i.am and filmmaker Kevin Smith, both of whom went vegan due to health scares, have praised how their new diets have transformed their well-being for the better.