Actress Edie Falco, best known for her role in HBO series success The Sopranos, is newly vegan and truly making the most of her deepened bond with animals!

Falco had previously been a vegetarian for an impressive 16 years, and then decided to make the change to veganism. This followed her work with PETA, where she became aware of her ‘hypocrisy’ and contradictory lifestyle: consuming animal products whilst she was also working to save animals, such as by campaigning against circuses and horse-drawn carriages. Eight months after this realization, she officially became vegan.

This month, the animal-lover actress took a trip to Acton California’s Farm Sanctuary, an animal rescue organisation, to raise awareness of the positive relationship we ought to have with animals.

Falco was able to meet many of the rescues, including black steer Bruno and Holstein breed steer Safran. 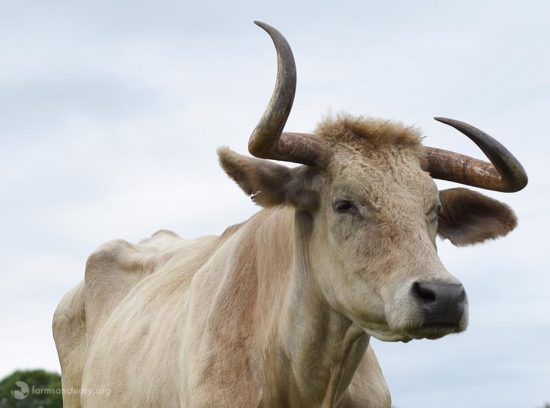 And, not only does it seem that the actress had a great time there cuddling the animals, but this is also positive attention for animal rights.

According to Gene Baur, Farm Sanctuary’s co-founder, “[c]elebrities are known by millions of people and they can play an important role in raising awareness and normalizing the idea that farm animals, like all animals, have feelings and deserve to be treated with kindness. They elevate our cause and can inspire citizens to think about cows, pigs, chickens, and other farm animals as friends, not food.”

The more influential people showing that we need to treat animals with respect and love, the better!