Founded in 2013, Farm2School is an organization working to empower young people through agricultural experiences. The group helps students make the connection between the vegetables they grow and the healthy plant-based dishes they can make at home.

The monetary award was gifted by the Sprouts Healthy Communities Foundation, which has donated over $5.1 million to health-related causes since it was founded in 2015. With the grant, Farm2School is launching a new mobile “Tampa Bay Kids’ Kitchen” which will enable young people to attend cooking classes and learn to cook healthy vegan meals using farm-fresh produce.

“We’re so excited to bring plant-based nutrition and cooking lessons to students who are learning to grow fresh veggies,” Elizabeth Leib, founder and director of Farm2School, said in a statement. “We’re the only organization focused on plant-based cooking that sets up the kitchen in the physical space of school gardens so kids can make the connection between growing food and eating it.”

Sprouts Healthy Communities Foundation Executive Director Lyndsey Waugh added, “We’re working to shift the landscape of health by focusing on programs that empower children with the access, knowledge, confidence and desire to make healthier food choices so that they can grow up to become healthier adults.” 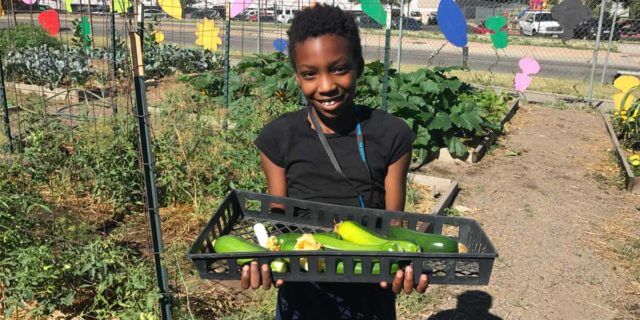 INSPIRING THE NEXT GENERATION

Initiatives are cropping up across the globe to educate young people on the importance of healthy, plant-based eating.

UK primary schools recently committed to serving 3.1 million meatless meals within the next year to improve student health, while schools across France are set to offer a meat-free menu at least once a week during a two-year trial. New Zealand’s Rotorua’s Tiaki Early Learning Centre even won a National Commission for UNESCO Award for Global Citizenship Education for its fully vegan menu. More recently, two vegan school meal initiatives in Germany received the United Nations 2018 Climate Action Award in recognition of their positive effect on student health.

Members of the public are invited to attend the inaugural Kids’ Kitchen tasting event from 10 a.m. to noon on November 3rd, on the upper campus of Turner-Bartels K-8 School. The event will coincide with the school’s Green Apple Day of Service, which will celebrate the opening of its new veggie garden.