Starbucks first teased the “sweet and creamy” dairy-free beverages in October 2017, however, a representative said at the time that the bottled beverages were not vegan because of “other ingredients.”

It appears the drinks have been made vegan following communication with People for the Ethical Treatment of Animals (PETA). Writing on Twitter about the new drinks, the animal rights organization wrote, “BIG NEWS. Following talks with PETA, Starbucks now sells vegan bottled Frappuccinos!”

The dairy-free drinks, available in flavors mocha and vanilla, are available at Target. According to a description on Target’s website, the Starbucks beverages contain 35 percent of your daily requirement of calcium. 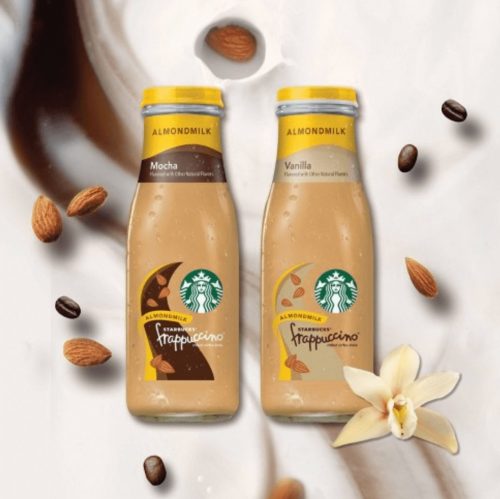 The Public’s Taste for Almond Milk

More people are pouring plant-based milk into their cups instead of dairy, and it’s not just vegans. In the US, 48 percent of dairy-drinking Americans are also purchasing vegan milk. Nearly 30 percent of young people in Britain have reduced or cut out dairy milk consumption.

Almond milk remains a firm favorite in America, according to Nielsen data. It was reported in 2016 that almond milk sales had boosted by 250 percent in the five years prior.

The largest coffee chain in the world has been increasingly leaning toward vegan food and drink.

In the US, the coffee company sells dairy-free oatmeal pots, protein cold brews, and vegan cupcakes. Starbucks locations in the Philippines offer “sinless” vegan chocolate cake made with avocado as well as a double-decker peanut butter and jelly sandwich.