Popular coffee chain, Starbucks, has launched vegan macadamia cookies in the bakery cabinet at locations across the U.S and Canada.

The new cookie has been listed as “vegan” on Starbucks’ website, helping people with allergies and other dietary requirements identify exactly what is in the treat. “Our vegan cookie includes oatmeal, macadamia nuts, almonds and coconut plus the delightful tang of dried cranberries,” the company notes on the website. “Scrumptious on its own and even better alongside a cup of coffee or tea.”

Vegan author, Jackie Day, wrote about the new cookie on her website. “I spoke with a Starbucks rep and she said the more we demand vegan food, the “more and more we’ll make it!” And I believe it!” she wrote.

“These yummy cookies come on the heels of Starbucks announcing new vegan lunch options set to launch later this year! AND, it sounds like some vegan chocolate chip cookies are in the works, too,” added Day. 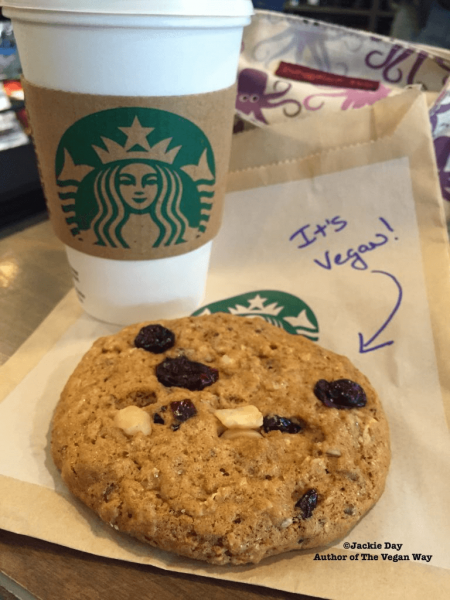 Last month, Starbucks’ COO, Rosalind Brewer, announced at an annual shareholder meeting that the coffee chain has plans to expand its vegan offerings. While the chain was the first franchise to roll out dairy-free milk choices, vegan food options have been lacking. But Starbucks has listened to its customers and is stepping up to meet demand.

Vegan options now abound at Starbucks, including Hippeas snacks, sprouted grain bagels, the Lentils and Vegetables Protein Bowl, various flavors of oatmeal, and  Barnana’s dried banana chips, just to name a few. On the beverage side, depending on the location, numerous types of dairy-free milk are available including oat, coconut, soy, and almond. The chain also frequently features seasonal drinks. For example, in time for spring, the chain launched two new beverage options: Hazelnut Mocha Coconutmilk Macchiato and an Iced Cinnamon Almondmilk Macchiato. Both beverages can be made vegan by asking for dairy-free drizzles. Additionally, bottled almond milk frappuccinos, made by the chain, arrived at Starbucks stores and select grocery stores this year.

Starbucks isn’t alone in its plight to attract more vegan customers. Recently, a Las Vegas casino added more vegan options to its menu due to high demand, UK restaurant chain Leon upped its plant-based options, and even pizza chains are hopping on the vegan movement by offering toppings such as vegan meat and dairy-free cheese.