An imgur user has just enlighted the Internet to what appears to be a secret at the nearly two-dozen Subway locations in Finland: the fast food chain seems to have subtly launched a vegan sandwich option to its traditionally meaty menu.

The sandwich launched last month during the popular Veganuary campaign, according to a post on Subway Finland’s Facebook page.

This isn’t the first time Subway has opened its menu to vegan options. In 2012, Compassion Over Killing arranged for Subway to offer three limited edition vegan subs at select restaurants. Considering veganism has been gaining major marketplace traction recently and the demand for plant-based food shows no signs of slowing down, Subways’ new menu addition comes at a pivotal time for the changing food system. 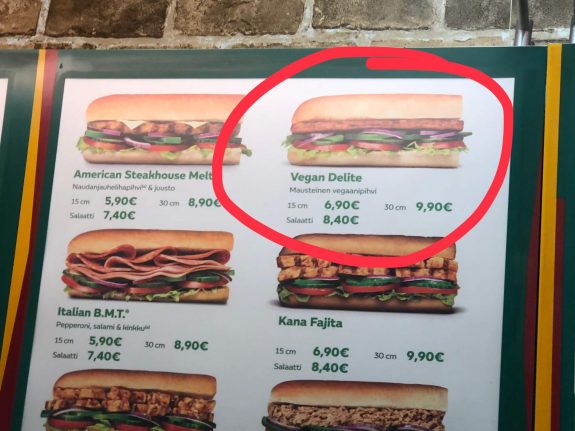 Customers also have the choice of creating a custom-made sub, using one of the vegan-friendly bread options, adding the vegetable toppings of choice, finishing with a condiment and seasoning.

Finland could well be the vegan fast food ‘place to be’, or just in the country where fast food giants are trialing vegan options; Subway’s Vegan Delite comes after McDonald’s trialed a McVegan burger in Finland last year, before making it a permanent menu item.

U.S. locations have been selling a ‘Veggie Delite’ sandwich for some time — which is just veggies and optional add-ins. When served on one of the chain’s vegan bread choices, the Veggie Delite can be vegan in the U.S.

No word yet whether Subway plans to continue offering or even expand its range of vegan meat to satisfy the increasing demand for plant-based menu items.