There has been a huge growth in the vegan and organic sweet treat market in the last few years, especially since plant-based eating has become increasingly popular. Last year, a report noted that the vegan chocolate sector is set for dramatic growth. But what about those who prefer sweets as opposed to chocolate?

Much like cheese, sugar is known to be a hugely addictive substance, so which brands can conscious consumers turn to for their fix of sweet treats? It turns out more childhood favorites are vegan-friendly than you’d think!

Sweet Guide to All the Vegan ’90s British Candy 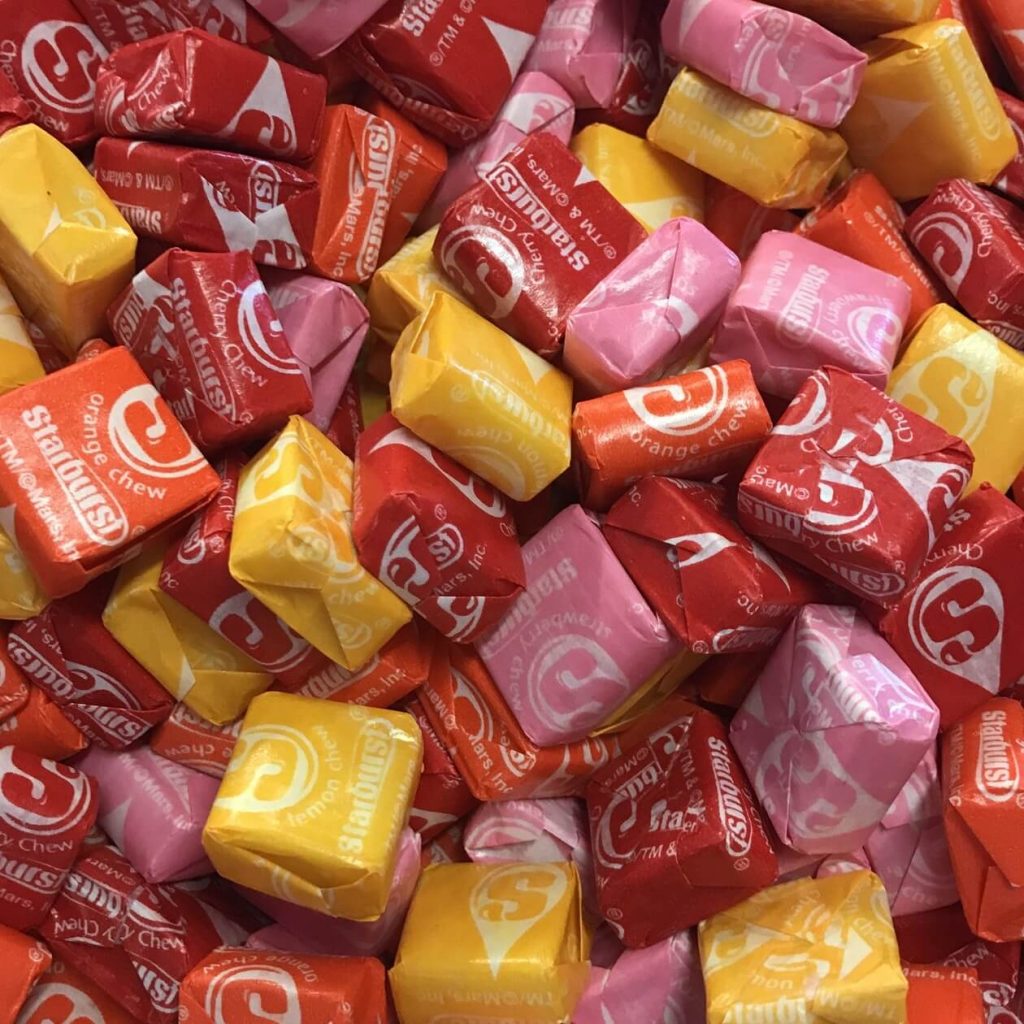 Originally known as Opal Fruits, these juicy square sweets are a staple for UK children (and adults!) Unlike in the U.S., Starburst in the UK do not contain animal gelatine. They are clearly labeled as “vegetarian-friendly,” and an investigation of the ingredients reveals they are also vegan-friendly.

When they were first released in 1960 the main flavors were Orange, Lime, Lemon, and Strawberry. Since then, owners Wrigley, have released several ranges, including Starburst Minis, which are also vegan-friendly. Made with fruit juices, the sweets are also flavored with natural colorings, including sweet potato and beetroot. 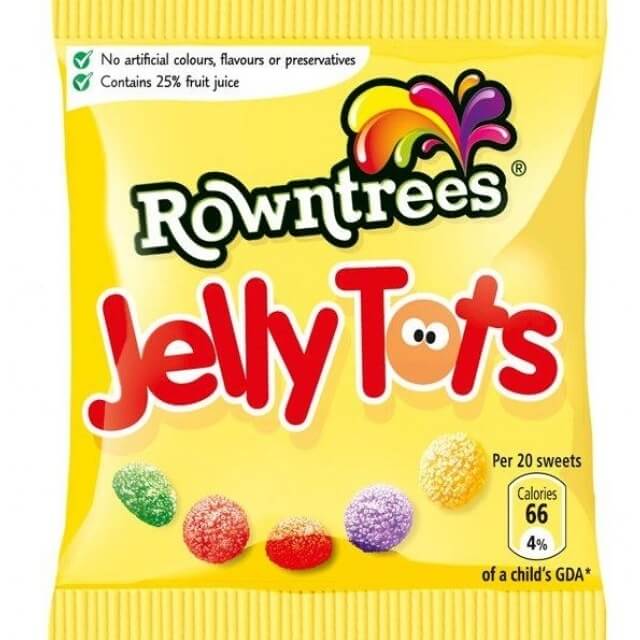 Jelly Tots were officially certified as vegan-friendly this year, in a move celebrated by kids-at heart all over the UK. Although the sweets do not contain animal-derived products, such as gelatin, they weren’t previously labeled as vegan-friendly.

The new labels are important, helping non-vegan and vegan consumers alike. According to Tod Bradbury of Animal Aid — which ran a campaign encouraging brands to clearly mark products as vegan –, “it enables those of us who avoid animal products entirely to easily find which products are vegan. Secondly, it also helps non-vegans realise how many delicious vegan options there truly are to choose from.”

What many of today’s children won’t know is that Jelly Tots were originally part of a “Tots” family, accompanied by Candy Tots, Tiger Tots, and Teddy Tots. Sadly these three lines were discontinued by Rowntree’s in around 1990, but Jelly Tots are still popular with many today! 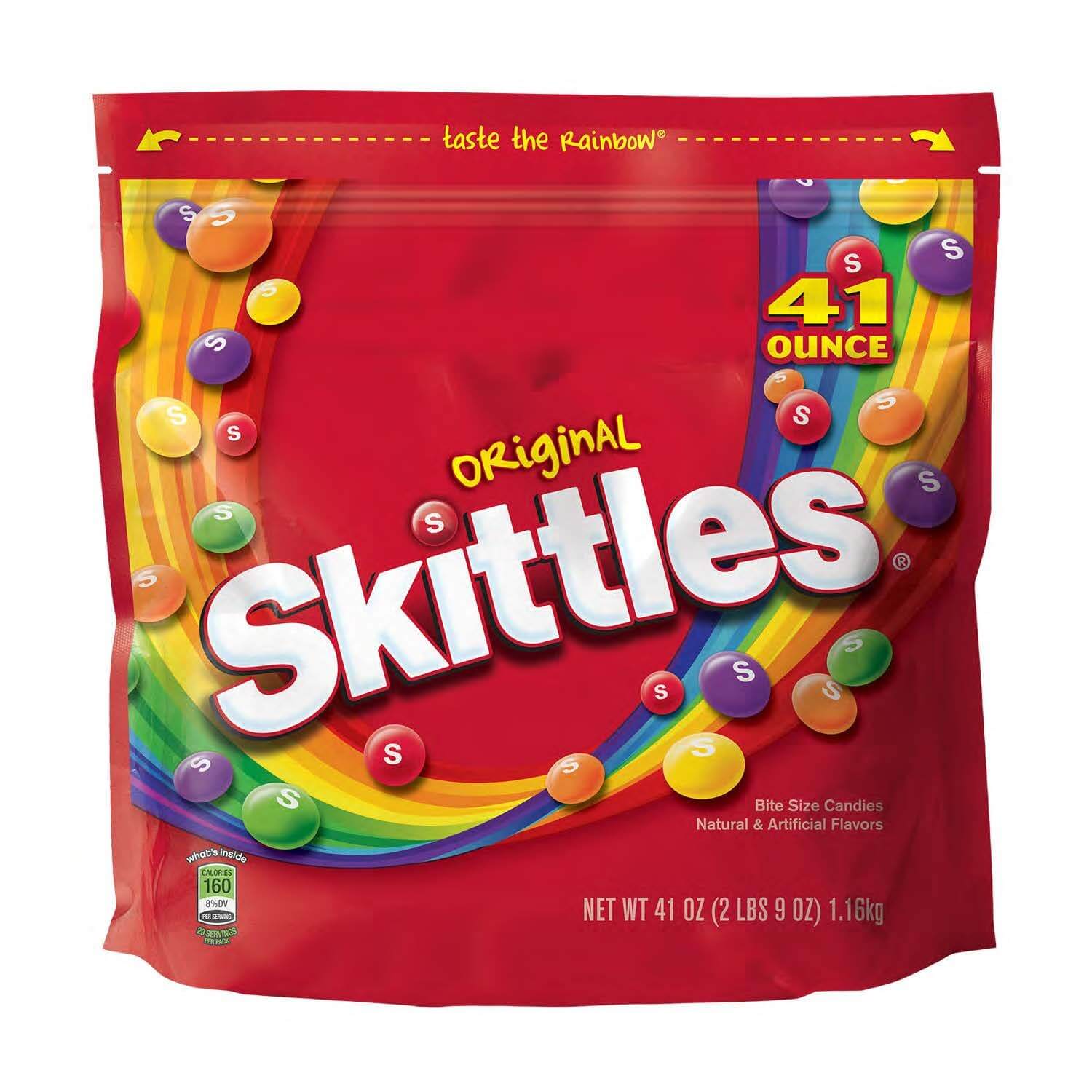 Sharing a parent company with Starburst, Skittles are owned by Mars Inc. The brand’s famous slogan “Taste The Rainbow” was created in 1994 and is now one of the world’s most recognized.

Similar to most brightly colored fruit sweets, red skittles used to use Cochineal Red — a coloring made from crushed beetles — to achieve their vibrant hue. Thankfully Mars Inc. has stopped using this coloring in most of its sweets now, including in Skittles. According to The Fact Site, in 2009 the brand also replaced the gelatine with a vegan alternative. The classic sweets are now labeled clearly as vegetarian-friendly.

However, it is worth checking the labels on their limited edition ranges, as the Blue “Once in a Blue Moon” edition is not vegan, according to Vegan Womble. 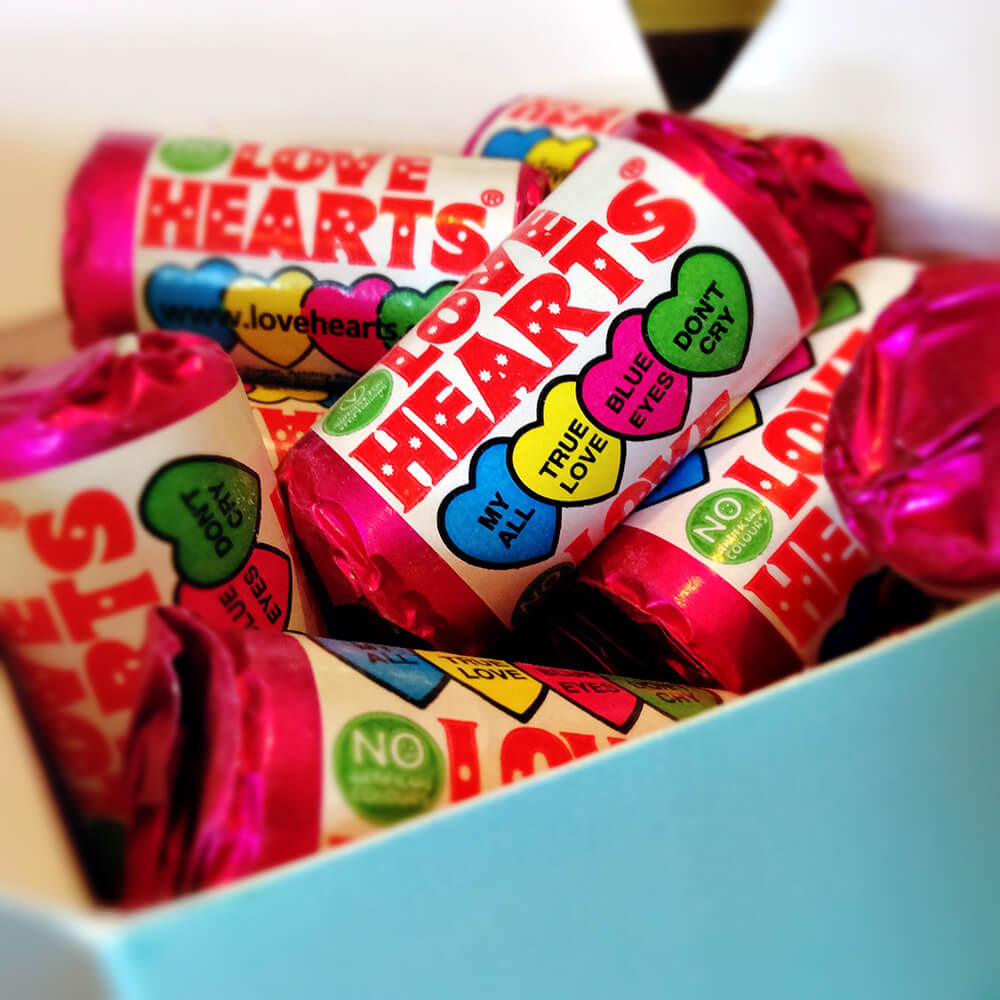 As pointed out by The Vegan Punk, “Love hearts have to be vegan as veganism is all about love!”

No self-respecting British child will have missed out on giving a love heart to their crush when they were younger, with options including “Be Mine” or “All Yours.” Nowadays you can find messages such as “Text Me,” as the sweets have been frequently updated since they were initially launched in 1954.

It’s also possible to customize your love hearts, which was done for the first time to commemorate Princess Diana’s wedding to Prince Charles in 1981. And for those looking for a refreshing treat on a Summer’s day, Swizzles Love Hearts are available as ice lollies! 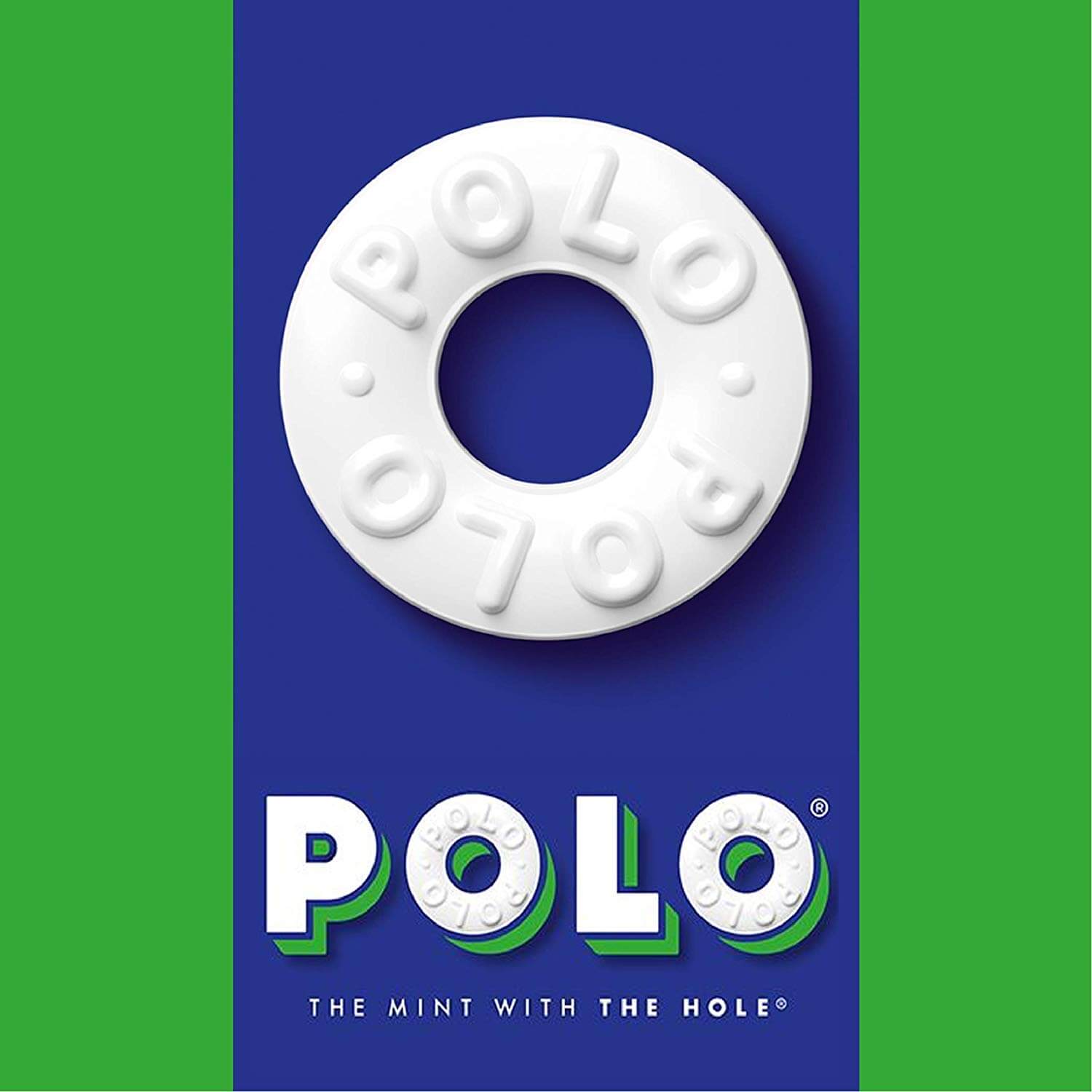 Originally created in 1939, the release of Polos was delayed until 1948 by World War II. The sweet is arguably a staple on British shelves and celebrated its 70th birthday last year.

To celebrate, the brand launched its very own Instagram and Facebook accounts, where fans of the sweet can learn new facts about how they are made. For example, “the compression force [used] to press a polo mint is the equivalent of 2 female elephants sitting on [a human being].”

Currently, the only polo varieties that are vegan-friendly are Original, Spearmint, Fruit and Sugar-Free. 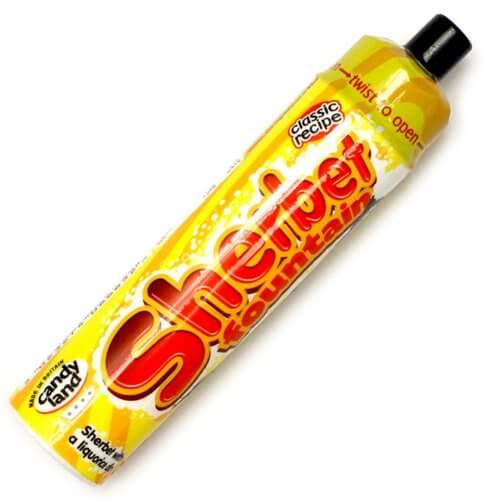 Creator of the Sherbet Fountain, Barratt, was founded in 1848. It became a huge success when owner George Osborne Barratt left toffee to boil for too long, accidentally creating “lockjaw toffee.” The launch of the Sherbet fountain nearly 75 years later, in 1925, cemented Barratt’s place as one of the biggest sweet manufacturers of its time.

Originally the licorice stick poked out of the paper wrapping and could be used as a straw to suck up the sherbet by biting the end off. However, in 2009, the hollow tube was replaced with a solid stick of licorice and now has to be used as a dip instead. 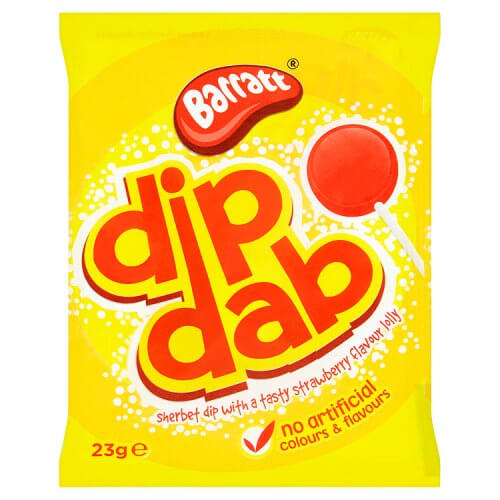 Similar to the Sherbet Fountain, Dip Dabs are based around a packet of sherbet. Dip Dabs are the perfect choice for those looking for the classic fizz on the tongue but who don’t like licorice. The original version features lemon sherbet and a strawberry lollipop.

Not to be confused with Double Dips, which are made by rival sweet manufacturer Swizzels Matlow, Barratt’s classic sweet is also available in Sour Apple flavor. This version was released in 2018, and contains a sour sherbet dip as well as an apple lollipop that will turn your tongue green! 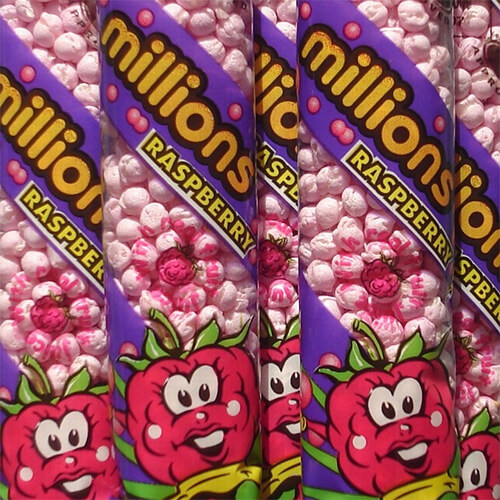 You get exactly what it says on the packet with Millions – the Millions slogan is “tasty tiny chewy sweets.” There are few things more addictive than pouring out a mouthful of millions and cracking the hard outer layer on each tiny drop until you have a giant wad that glues your jaw together.

There are nine flavors listed on the Millions website to choose from in the original range, from strawberry to Vimto flavor, all of which are approved by the Vegetarian Society and suitable for vegans.

Originally packaged in tube-shaped bags, the ranges have now extended to shakers, jars, and mini-packets. According to the Millions website, the Strawberry, Bubblegum, Raspberry, Apple, Blackcurrant and Cola are also all Kosher approved. 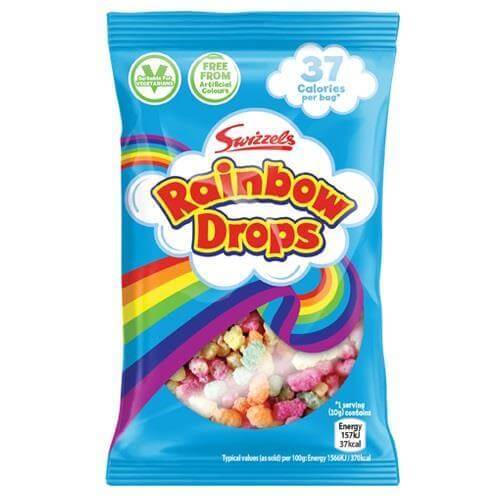 Vegan-friendly before the term veganism existed (no really, the sweets were released before World War II and the word “vegan” was coined in 1944), these puffed maize and rice treats have gained status as retro sweets.

According to the Swizzels website, Rainbow Drops were “initially created in a sealed vessel and fired out of a large cannon”, and the company makes enough of them each year to fill 25 Olympic swimming pools! 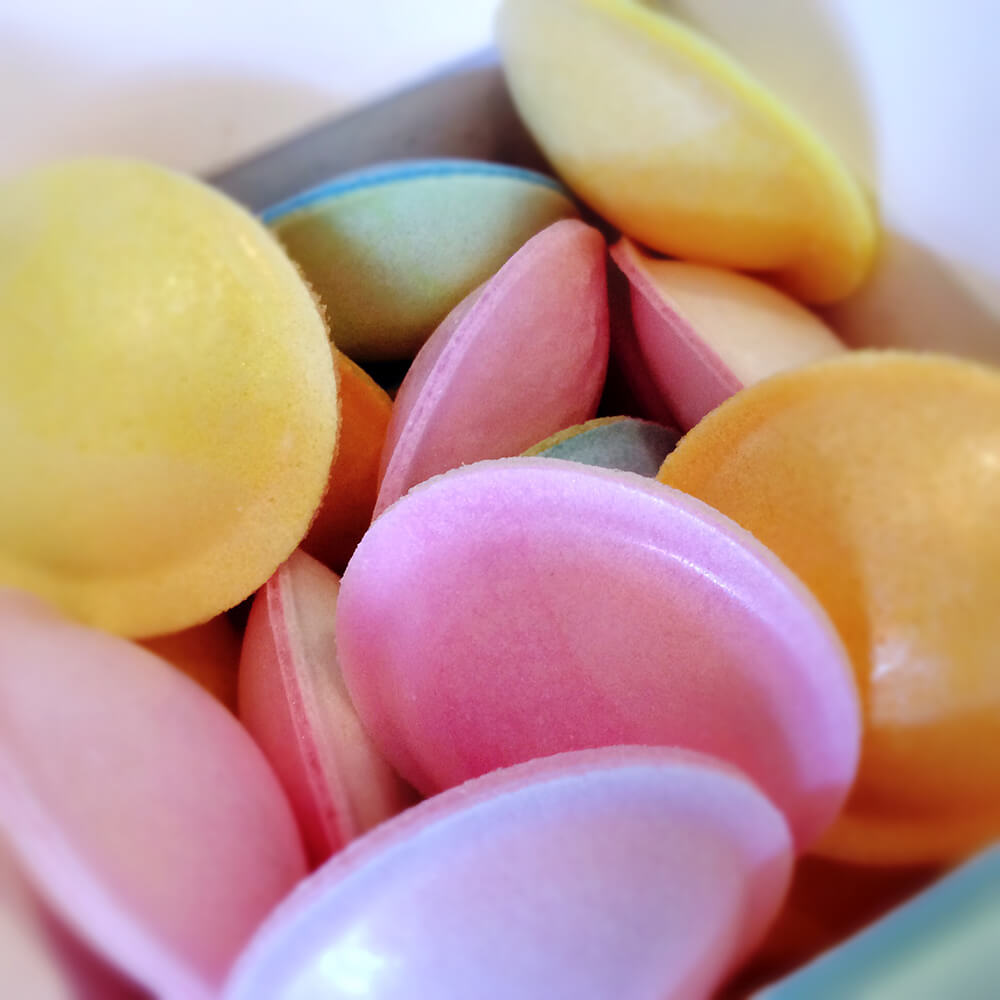 Though Flying Saucers are usually classed a British retro sweet, their origins are actually in Belgium, where they are also still hugely popular today.

They were created by an Antwerp-based communion wafer producer, in response to a drop in demand for its staple product. Now owned by Astra sweets, the disc-shaped sherbet filled treats are still made to the original recipe, using all natural colorings for the outer shells, according to the Astra website.

According to Swizzels, Refreshers and Drumsticks Choos are now vegan-friendly! These are an ultimate childhood favorite, and for many, the first taste takes them right back to the 1990s. Choose from lemon, apple, raspberry, strawberry, or pineapple for your nostalgic sweetie fix.