Taco Bell announced the launch of a new range of tortilla chips at grocery and convenience stores around America. Animal rights organization PETA confirmed that the snacks are vegan.

“Taco Bell is making it even easier for fans to connect with the nation’s leading Mexican-inspired restaurant brand by bringing them the Taco Bell flavors they crave at home, on the go or when upping their chip and dip game for their next party,” the brand said in a press release.

“This launch of our first line of sauce packet-inspired chips gives our fans a new way to access a taste of Taco Bell,” said Marisa Thalberg, the Chief Brand Officer at Taco Bell. “Our sauce packets are one of the brand’s most unique aspects and were the natural choice for both the flavors and packaging of our tortilla chips.”

The “iconic flavors” will include Classic, Mild, and Fire, derived from the taste of Taco Bell’s well-loved sauces of the same names. The Classic tortilla chips are salted and crispy, described as “the perfect sidekick for your dip of choice.” The Mild flavor mirrors the “bold” taste of Taco Bell’s Mild sauce and features traces of cumin and three chili peppers. The Fire selection contains hints of jalapeños, chili peppers, and paprika. 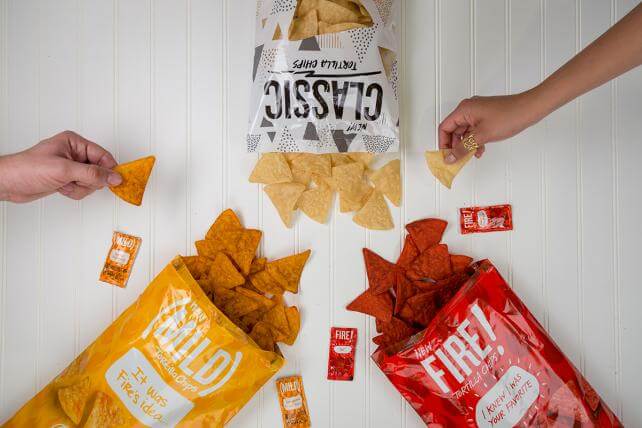 Taco Bell joins the growing list of chain stores adding vegan options to menus and store shelves. A rising demand for plant-based food is behind the changes. This year, Starbucks vowed to add more vegan options, saying, “We know our customers ask us that repeatedly, and we’ll be responding.” Another representative revealed that “the more [the public] demand vegan food, the ‘more and more we’ll make it!’”

Research from late last year revealed that retailers could be missing out on sales from the growing vegan market by not supplying animal-free options.

Taco Bell’s chips aren’t the chain’s only vegan items. All Taco Bell locations offer a comprehensive customizable “hidden” vegan menu; the restaurant staff are all trained on how to address vegan requests with burritos, tacos, nachos, and other items all easily made vegan by leaving off cheese, sour cream, or meat.