The British are coming…to Eat Drink Vegan. This highly anticipated Los Angeles vegan food and beer festival just announced its first round of vendors, and it is overwhelmingly English. Tickets for this event are on sale beginning today, so Los Angelenos can save on that London food tour and experience a taste of the UK in their hometown.

Eat Drink Vegan has evolved since its inaugural event in The Roxy Theater parking lot in 2009. Back then, it was coined the Vegan Beer and Food Festival, but the name transformed as the event grew. Nicknamed “Vegan Coachella,” the festival offers so much more than just beer and vegan food, and it has certainly outgrown the constraints of the parking lot. Attendees can look forward to experiencing over one hundred vegan food vendors and unlimited tastings from over two hundred and fifty beverage companies, including cold brew, kombucha, wine, and of course, plenty of vegan beer.

This year’s event will feature prominent Los Angeles-based vegan eateries, but the curators decided to continue the festival’s expansion by incorporating the most buzzed about vegan vendors from around the world – including the UK. 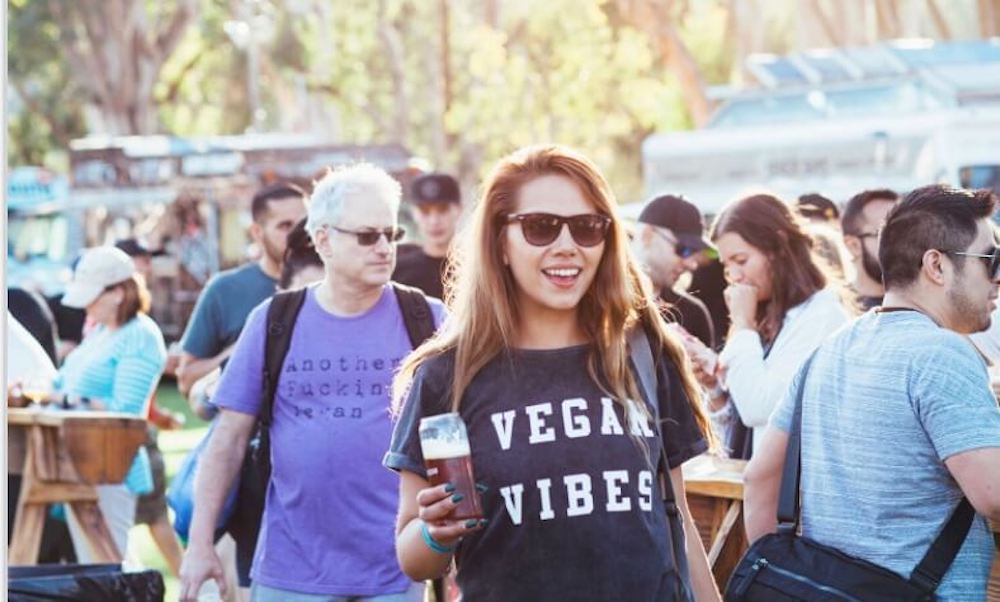 Event founder, Nic Adler, commented on this international reach: “This year of the festival has a lot of firsts. With our brand new partnership with Seed Food & Wine Week…we really want to go big. This is the first year that Eat Drink Vegan is bringing global vendors to the festival and we’re really most excited to give folks in California a chance to try some of the hottest vegan restaurants around the world in one place.”

Adler is thrilled to bring these global vendors into the LA vegan food scene. He said, “I can’t wait to see the person who has been dreaming of Temple of Seitan…their whole life try it for the first time. The vegan scene in the UK is growing so quickly…it’s exciting to see plant-based food and lifestyle gain traction in a country where ‘meat and potatoes’ tend to dominate.”

In addition to these British imports, festival-goers can look forward to a plethora of vegan vendors from other far-off places. Charly’s Vegan Tacos (Mexico), Arlo’s (Austin, TX), The Dutch Weed Burger (Netherlands), and the Herbivorous Butcher (Minneapolis, MN) will also join the party. Finally, crowd favorites like New York-based Peaceful Provisions and Portland’s famous Sizzle Pie will return for round two.

Tickets for this international celebration of vegan food and beer are limited and likely to sell out. Both General and VIP options are currently available online. The event will be held on May 26, 2018, at the Pasadena Rose Bowl.