The UK’s largest supermarket chain, Tesco, is set to launch a selection of festive vegan pastry rolls for Christmas.

Tesco is giving its customers an official sneak peek of its upcoming festive food range for 2018, revealing an array of options for your holiday table. 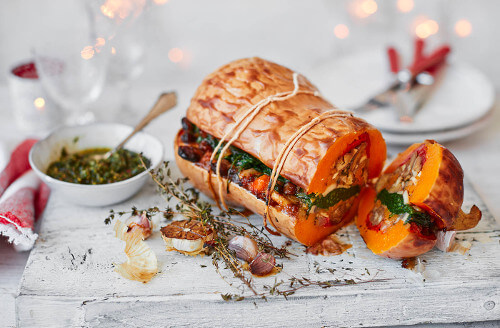 With the entire range not yet fully revealed, consumers are left to speculate at other possible products. Popular guesses include the pecan and peanut roast served with maple-roasted root vegetables, vegetarian portobello Wellington, and a vegetarian nut roast with a mulled wine and cranberry glaze, which was featured on Tesco’s 2017 holiday menu.

Just before Christmas of last year, Tesco appointed vegan chef Derek Sarno, creator of the supermarket’s “Wicked Kitchen” ready-meal range, as Director of Plant-Based Innovation to develop new product launches, including the holiday range. In a statement at the time, Sarno said, “Tesco’s Christmas campaign celebrates the many ways we come together at Christmas, and with the quality of vegetarian and vegan food now so good there may even be squabbles across the dinner table over who gets what.”

Tesco isn’t alone in launching a variety of vegan options ahead of this Christmas; fellow supermarket giant Asda has also revealed details of its new festive range. Reportedly, the chain is set to launch a plant-based chestnut roast, vegan chocolate caramel pots, a vegan pâté, and even a vegan cheeseboard with three different types of dairy-free cheese.