In a press release, the company revealed that Tesco locations had nearly sold out of the first delivery of 40,000 Vivera vegan steaks sent to stores. Some supermarkets sold out within a day of the launch. The success was unexpected but welcomed by the company.

“The consumers in England are almost without exception very enthusiastic about the taste and texture of the steak,” said Gert Jan Gombert, commercial manager for Vivera.“The hashtag #Vivera almost explodes on Instagram. This ground-breaking product has also received a particularly positive reception from professional critics. We will do our utmost to meet market demand as much as possible by increasing our production faster than planned.” 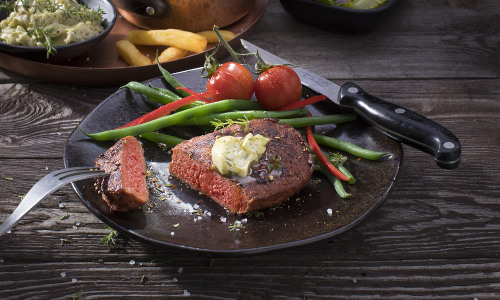 Following the UK launch, Vivera has announced that from June 11 onwards, its plant-based steak will launch in Albert Heijn and JUMBO Supermarkten in the Netherlands and Carrefour in Belgium. Vivera foresees that it will be able to produce millions of units of its vegan steak this year and is working on increasing production to further expand into Europe and meet the high demand for vegan meat.

Made from wheat and soy, Vivera’s plant-based steak is made to imitate the look, flavor, and texture of a traditional animal-based steak, right down to a “bloody” pink center created with natural, plant-based coloring. Reviewers from New Foods who tried the new vegan meat reported that it had an undeniably savory, meaty flavor akin to a hamburger patty.

Over the past few months, Tesco has increased its offerings of vegan products, coinciding with the consumer shift towards vegan food in the UK. In January, the leading supermarket launched its Wicked Kitchen range of ready-made vegan meals in collaboration with plant-based chefs Derek and Chad Sarno. The company gave partial credit for its spike in revenue to the new plant-based meal range and soon announced plans to release additional Wicked Kitchen products to the line. In addition to working with plant-based brands like Vivera and Oumph! to bring new options for vegan food to Tesco, the company has also steadily rolled out products in its own line of Tesco vegan meat. In May, the company announced that vegan chicken would be joining its fishless fishcakes and meatless chicken nuggets in its own-brand of plant-based meat.