UK leading supermarket chain Tesco is set to launch vegan catering trays especially for parties, office meetings, corporate events, or for those who just like to eat a lot of plant-based meals.

The chain’s director of plant-based innovation Derek Sarno – who is also the co-founder of the company’s Wicked Kitchen line – revealed the news on his Instagram account. In a story, Sarno wrote, “Coming soon in 2019! [Wicked Kitchen] catering trays. Elevating office meetings, home parties, and big appetites! Available soon at [Tesco].”

Although it is not confirmed which products will be included in the new catering trays, Sarno’s picture showed a variety of wraps and sandwiches. Currently, the brand offers a Sweet Potato Pakora Wrap and the Bubble and Squeak Greens Sandwich, amongst a number of other plant-based salad bowls and ready meals. 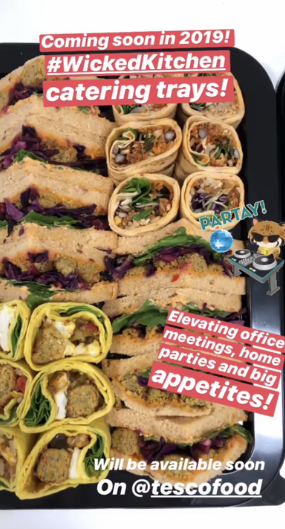 The launch of the new catering trays is another step into the world of plant-based products for the supermarket chain, which, throughout 2018, has embraced vegan food. It has added new dairy-free ice creams to its shelves, as well as new own-brand plant-based cheeses. In the fall, it launched the much-anticipated vegan “bleeding” Beyond Burger in its meat counters.

In early December, the chain even launched a new app, named the Festive Menu Helper, to assist people in finding vegan and vegetarian holiday food in its stores.

The launch of the app followed a survey conducted by Tesco which revealed that over 520,000 Brits will tuck into a vegan or vegetarian Christmas main this year, with one in five hosts catering to at least one meat-free guest. “Christmas can be a stressful time and this research shows just how many different tastes festive home chefs across the nation are catering for,” said Tesco’s executive chef Martyn Lee.

The research even showed that Brussell sprouts are more valued than meaty pigs in blankets at Christmas time, with two-thirds of customers stating they were a more important addition to festive lunch.

Although Tesco’s other plant-based plans for the new year are not yet known, its new vegan catering platters will be arriving in early 2019.