The LA-based model attended a vegan fashion show yesterday benefiting the Animal Hope and Wellness Foundation, a nonprofit organization that rescues abused and neglected animals, including victims of the Asian dog meat trade.

Along with Holliday, vegan celebs including musician Moby, No Doubt bassist Tony Kanal, and actor and entrepreneur Alicia Silverstone. The latter shared how she made the connection between her pet dog and animals raised for food. Holliday shared a snippet of the speech on her Instagram story, captioned with the matter-of-fact sticker, “duh.” 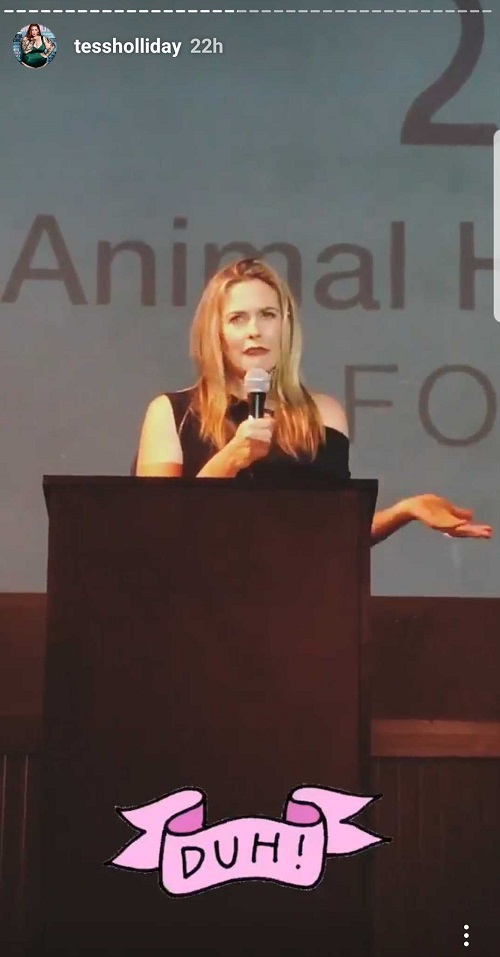 “I did everything with him, my dog Samson – and this is a dog I rescued, of course,” said Silverstone. “And it became clear to me that I was being really, really hypocritical because this dog could feel pain, and he felt joy and love and he has the capacity – he wanted to live. And so I realized that dogs aren’t really any different than cows and pigs and chickens and all of [those animals.”

Holliday and Cummings dined at a restaurant after the show. While neither Holliday nor Cummings have spoken on their diet, their dinner table showed a noodle dish and a rice dish, no meat in sight.

Cummings is particularly vocal about treating animals fairly on social media. The 36-year-old comedian has a pet pig named Joe. Cummings is very vocal on social media about there is no such thing as a mini pig – it’s a trick used by breeders to sell unsuspecting people pigs they believe will stay small.

Her Instagram is also peppered with photos of animals, ranging from bears and lions saved from the exotic pet trade to rescued farm animals like cows, goats and horses.