Vegan neighborhoods are popping up all over the world from Berlin to Los Angeles, and according to Happy Cow’s new Top 10 Vegan-friendly Cities, Toronto is amongst the world’s Top 10.

Toronto is home to dozens of vegan restaurants, as well as two of North America’s biggest vegan food festivals: The Veg Food Fest as well as Vegandale’s Vegan Food and Drink Festival.

Not too shabby! We are blessed to have three vibrant and well-patronized vegan neighborhoods.

Bloorcourt and Bloordale for instance, also known as “Vegan Alley” are two connected neighborhoods spanning a portion of Bloor St. from Lansdowne to Christie.

There are a number of vegan restaurants in this strip which are staples of the Toronto vegan food scene such as Apiecalypse Now, Bloomers, and Through Being Cool, to name a few. This strip has not always been a desirable destination, which made sense that this transitioning up and coming neighborhood became a prime location for fledgling vegan businesses to establish themselves.

If you are visiting Toronto, this neighborhood is very affordable and easily accessed on foot, or by public transit, just get off at Christie Station, grab a slice at Apiecalypse, then start your journey west. 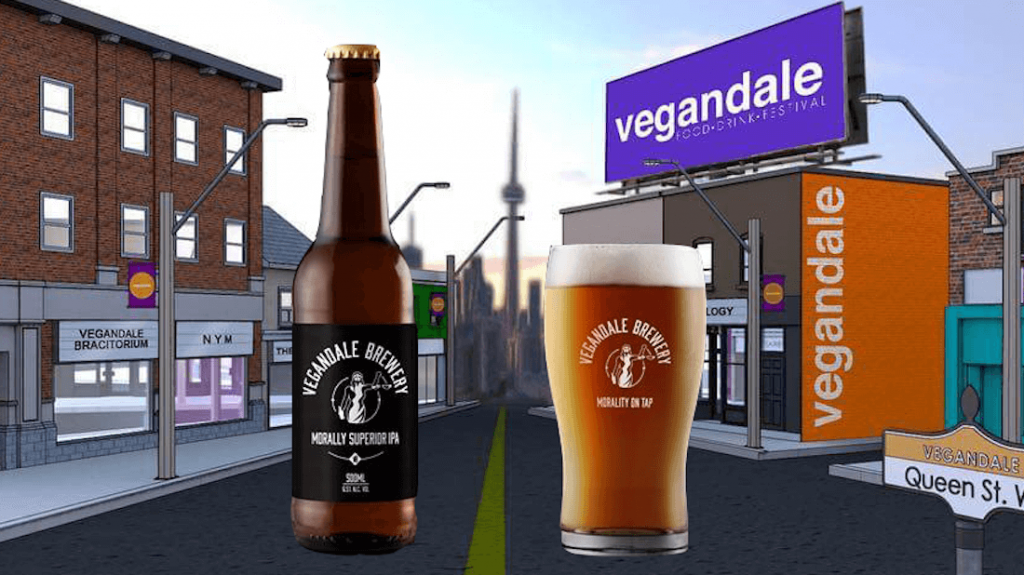 Another vegan neighborhood and likely more well known is “Vegandale.”

The businesses that comprise Vegandale are located next to each other along a small section of Queen Street West, the main street which runs through the wonderfully vibrant and colorful neighborhood, Parkdale.

Vegandale is a very impressive project brought to us by the team at The 5700 as a destination for vegans to eat and shop ethically at either Doomies, Mythology Diner or The Imperative.

The 5700 are also the team behind the Vegandale Vegan Food and Drink Festivals in Toronto, New York, and Chicago.

They are CRUSHING IT.

And they are not done.

The entire vision of Vegandale is still coming to fruition with Prohibition Pie, Vegandale Bracitorium, and Not Your Mother tentatively set to open Summer 2018.

Another well-known but less overtly branded neighborhood is Kensington Market.

Kensington Market is one of Toronto’s oldest and most frequented neighborhoods. It is pedestrian friendly, culturally diverse, and it is home to vintage clothing shops, live music venues, patios serving up the finest local craft, as well as tons of legit vegan food–everything from mushroom tacos to Caribbean take-out.

While no one has been bold enough to try and rebrand this neighborhood everyone should schedule a few hours of any visit to Toronto to wander up and down the streets, buy some cheap sunglasses, and try King’s Vegetarian, Saigon Lotus, or Cosmic Treats.

Or all of them.

Pro Tip: Saigon Lotus has a Lunch Special and Kings Vegetarian has steamed curry buns for 1.49$.

We have a great variety of affordable options all throughout the city and I promise you i’m never far from a delicious and affordable vegan meal.

Are you visiting Toronto soon? If so, drop a line and I’ll point you in the right direction.