It has been said that chefs and rock stars often have a lot in common. They work late, play hard, have at least one tattoo, and create something truly epic when they’re in their element. Dale Hibbert, the original bass player for the iconic British rock band The Smiths, found his calling in the kitchen following his rocking career. Now a professional vegetarian chef, Hibbert has purchased a former Bangor pub and transformed it into a plant-based coffee shop and cafe called Domu.

According to the Daily Post, Hibbert and his wife put £150,000 into the space, including the purchase and renovations. The musician was sold immediately and bought the former O’Shea’s Irish Bar the day after he toured the site. He told the press, “Sometimes you know as soon as you walk into a place it is right, you just fall in the love with it. That is what happened here even with all the mess around. There was something about the place that was special.” 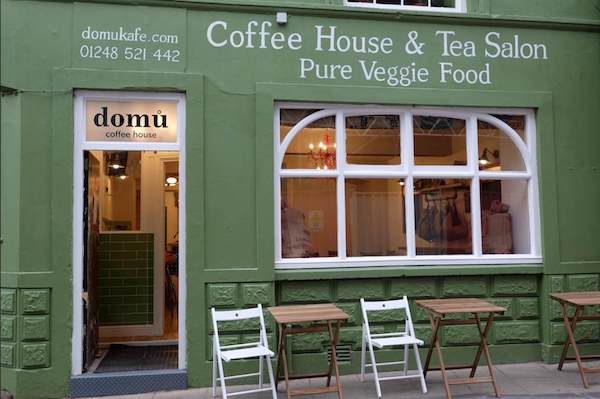 As the head chef, Hibbert will continue to add his own special touch with his learned culinary acumen. He opened a vegetarian cafe twenty years ago in Manchester, and like the times, his cooking has evolved into the plant-based space. He noted, “When I was younger vegetarian food was basically just someone scraping the meat off a meal and serving it. It has changed so much and now you have Michelin chefs focusing menus purely on vegan food. We think this is a market that will keep on growing and we think we’ll do well in Bangor.”

Along with the extensive coffee, tea, and espresso menu, Domu will serve a selection of vegetarian and vegan offerings for breakfast, lunch, and dinner. The menu has yet to be posted, but one can expect far more than day-old muffins and pre-packaged salads which are so characteristic of corporate coffee house chains. Hibbert wrote on the cafe’s webpage, “The food I cook in the Domu kitchen is the same food I would cook and eat at home.”