Abhay Rangan, a 21-year-old animal rights activist and entrepreneur from Bangalore, India, is bringing affordable plant-based milk to customers across the country through his company Veganarke.

The company was conceptualized by Abhay when he was only 18-years-old after realizing “that vegan alternatives were several times more expensive than dairy,” the company website notes.

Veganarke currently manufactures a line of plant-based, shelf-stable almond and coconut milk under the brand GoodMylk. “On popular demand, we have launched coconut milk, which has been specially designed to impart a strong aroma, but a mild taste that suits coffee and tea drinkers,” Abhay told The Better India. 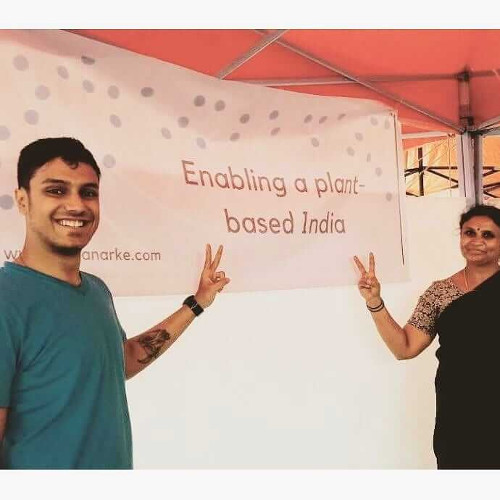 Veganarke also produces the world’s only shelf-stable vegan yogurt. Called Peanut and Rice Curd, it can substitute for Indian yogurt in traditional recipes for lassi, dahi puri, and more.  Producing shelf-stable products allows Veena and Abhay to deliver its product to customers outside of the city of Bangalore and they hope to begin deliveries all across the country. “While people in the metropolitan cities are far more aware and keen on experimenting, one needs to work towards establishing that in smaller cities and towns,” Abhay said.

With the help of his mother, Veena, an engineering graduate, Abhay was able to take his company out of their home kitchen and into a commercial production facility. Today, Veena handles Venarke’s manufacturing efforts. The company is run by the mother-son duo, but the entire family is vegan. In 2010, Abhay’s parents went vegan for their wedding anniversary. A year later, he and his sister also made the decision to ditch animal products.

In addition to founding Veganarke, Abhay has long been a champion for animal rights. At age 16, he founded the non-profit the Society for Animal Rights and Veganism, which has organized more than 250 campaigns in 10 cities across India. Abhay is also a Stanford Innovation Fellow and TEDx Speaker who has spoken to crowds in more than 10 cities in two countries about animal rights and veganism.

The vegan movement continues to spread throughout Indian. Last year, multinational food company Danone decided to cease production of milk and milk products for the Indian market following a slump in milk sales. Realizing the growing demand for dairy-free options, startup Drupe Food India launched a range of almond milk in a variety of flavors.