Traditionally made with beef, egg, and dairy products, the vegan company makes its signature savory treat with potato, onion, swede, and seitan – a plant-based meat substitute made from vital wheat gluten. Some of its pasty products include dairy-free cheese and all of them are free from palm oil, known for its destructive impact on the planet.

Sam Grady, the owner of the company, said in a statement: “I started the company in 2016 when I realised there wasn’t much out there for vegans apart from a bland trio of veg.”

“Most pasty companies have upped their game when it comes to a vegan offering since then but we’re the only one rivaling the traditional pasty for flavour,” he added.

The dishes are “selling well” in Cornwall, according to Cornwall Live; even people as far away as Scotland and Wales are buying the product. 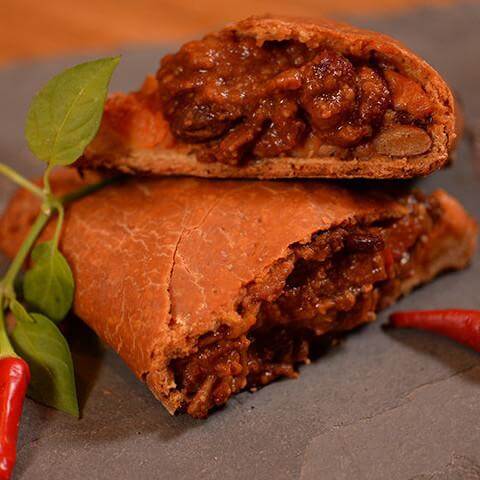 Since the vegan pasty company’s inception, more vegan-friendly options have arrived on the market, including more plant-based pastries. At the start of the year, the UK’s largest bakery chain Greggs launched its first-ever vegan sausage roll.

The dish – filled with protein-packed Quorn meat and wrapped in 96 layers of animal-free puff pastry – was a hit, besides a few critics (we’re looking at you, Piers Morgan). It sold out in multiple locations, inspiring Greggs to bring the meat-free roll to all of its 1800 stores.

The Cornish Vegan Pasty Company isn’t the only brand working to keep up with Greggs. High street bakery chain Poundbakery launched its own vegan curry roll to cater to growing demand. It has sold plant-based sausage rolls for years but after Greggs’ vegan version took off, Poundbakery began heavily advertising its own.

The UK’s Growing Interest in Veganism

Around the world, people are tuning into the benefits of a plant-based, cruelty-free lifestyle. The UK, in particular, is leaning away from animal products and in turn, a growing number of businesses are launching vegan food options to keep up.

Popular fast food chain Pizza Hut trialed a cheesy vegan jackfruit pizza at the start of the year and made the menu item permanent after it sold nearly 20,000 units in less than a month.

Leading UK retailer Marks & Spencer recently launched more than 60 plant-based meals, snacks, and ingredients to keep up with competitors like Tesco and Sainsbury’s.