Chicken wings are more than just food. They are iconic of a modern social experience. Wings are communal celebration foods, especially in the sporting community. Of course, traditional chicken wings have ethical and health implications, which can ruin any social gathering. These Wingz, an up-and-coming family-owned business based in Chicago, is making it possible for everyone to join the party with its line of spicy vegan wings.

This small plant-based company launched in January 2017, catering to local events in Chicago. In just over a year, These Wingz has covered more ground, making its California debut at last month’s Vegan Street Fair (VSF) in Los Angeles, the largest single-day vegan event in the world. “We wanted our first event in California to be VSF, because of how fun and exciting the event looked,” explained the owner, Nathan Echols. He said that he and his team of family members now cater events and festivals all over the country.

“We started These Wingz To provide good food that happens to be healthy, perfect for vegetarians, flexitarians, and vegans alike. We want These Wingz to bridge the gap between people who aren’t ready to change their diets and vegetarians across the country,” said Echols. 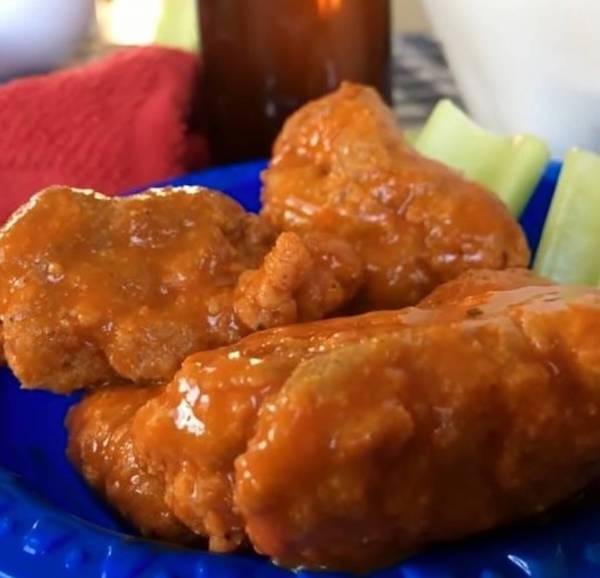 Echols went vegan himself “after many years of on and off vegetarianism.” He finally made the vegan commitment when he realized the myriad of quality vegan options on the market. He continued, “I love good food, and the idea that I’m not harming animals and eating healthier appealed to me.”

These Wingz is contributing to those quality vegan options, “one vegan wing at a time.” Echols said that the growing popularity of veganism helps his business, and in turn, his business helps promote veganism by allowing consumers the power of choice. The key is to provide a product that doesn’t make the consumer choose between taste and health. People want both, and These Wingz delivers. In regards to the vegan movement, Echols further noted, “Younger people are demonstrating more social responsibility than I did at my age. Social media has a large role to play in [vegan] popularity, as well as more options in the marketplace.”

Those who attended VSF saw first hand the plethora of options Echols eluded to. The event hosted over 200 vegan vendors, and These Wingz was not the only vegan chicken vendor on the block. He had plenty of business, though, with crowds of hungry festival-goers lining up in front of his stall.

Like any established wing-centered restaurant, These Wingz offers more than just one option. From spicy to sweet, and even bourbon-infused, there’s a wing for everyone. Flavors include Mango Habanero, Brown Sugar and Hickory, Sweet and Tangy, Spicy Bourbon, and Buffalo. All are seitan-based, then seasoned and sauced accordingly. Serve alongside some celery sticks and vegan ranch, you’ll need the fresh veggies and mild dip to cool down.

These Wingz are available to ship to select locations; check the website for details. To find These Wingz at a festival near you, follow the company on Instagram.