The modernly furbished Bar Cafés evoke a relaxed atmosphere to socialize and work while enjoying a meal or espresso beverage. The chain prides itself on its “unlimited breakfasts,” which are complimentary for children. The menu is clearly labeled with bright green dots featuring a “V” in the center to indicate which items are “suitable for vegetarians.” Although there are no specific vegan indications, many items seem to be vegan-friendly, including the fresh tomatoes, baked beans, fruit salad, granola, fresh mushrooms, and toast with jam. Further, the menu also offers Linda McCartney Vegetarian Sausages, which the description states are “suitable for vegans.”

For dinner, guests can choose two courses for £12. Several courses are marked with the familiar “V,” but vegans are encouraged to ask to ensure that these items do not contain hidden forms of eggs or dairy. Vegetarian (and potentially vegan) options include a falafel and veggie burger (no bun), skin on fries, house salad, roasted vegetable jalfrezi (no naan), and a superfood salad. 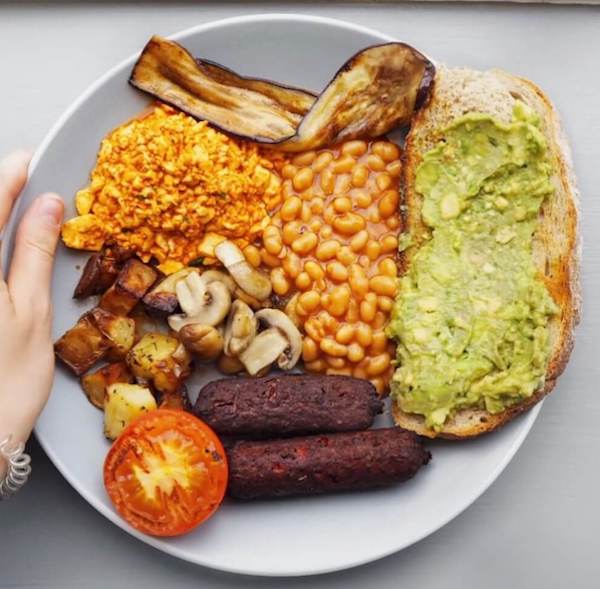 Although only two of the Travelodge hotels currently classify as a “New Style hotel,” 180 of the 566 locations feature a Bar Café and its updated menu.

Vegan options are becoming increasingly popular amongst UK hotels. Central London’s W Hotel launched a vegan menu in March, in partnership with one of the city’s established restaurants, Jikoni. In Edinburgh, the five-star Radisson Collection Hotel, Royal Mile Edinburgh debuted a vegan afternoon tea service, also partnering with a local cafe to ensure quality and flavor. The hotel’s head chef, Andy McQueen, stated, “Be it for animal welfare, health or environmental reasons, veganism is of rapidly growing importance to our guests.”

Celebrity chefs have taken notice of the trend and opposed to fighting it, many are bending to customer demands. Kim Woodward, “MasterChef: Professionals” contestant and head chef at Soho’s 100 Wardour Street, has vocalized that vegan options are a “must have” for London restaurants to remain relevant, be that Michelin-starred venues or fast-casual concepts.

To help hotels and restauranteurs expand their plant-based range, Folia, a new international hospitality and restaurant consulting group by Saudi Prince Khaled Alwaleed and Chef Matthew Kenney, is there for support.