Vegan musician Travis Barker, drummer for American rock band Blink-182, his daughter, pop artist Alabama Luella Barker, musician Moby, and scores of other celebrities have given their support to the upcoming March of Silence. The activist-driven event was created in order to show solidarity to the millions of animals who are used as commodities each year.

Earlier today, Barker, a vegan of several years, posted a photo of himself and his daughter Alabama via social media. The picture shows the pair with tape over their mouths, symbolizing how the suffering of animals is often “silenced” behind closed doors. 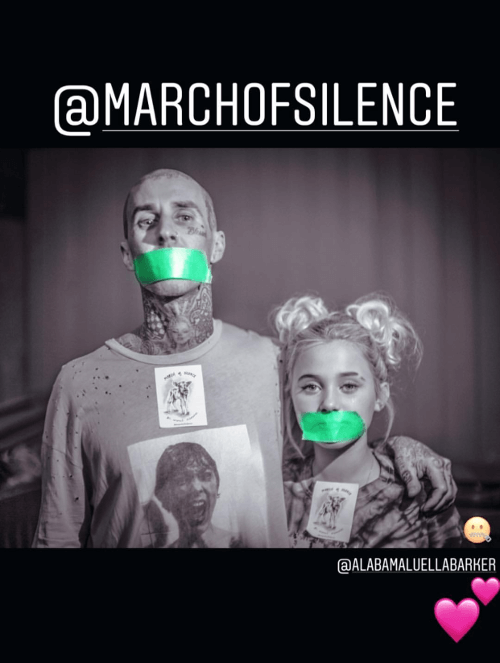 “Our Mission is to bring awareness to the exploitation and abuse of ALL ANIMALS,” states the official website. “[F]rom the neglected house pets to exploited animals of entertainment (kept in zoos, aquariums, theme parks), from beauty test subjects and grotesque fashion statements to beloved farmyard animals used and abused in the born-to-die animal agriculture industry.”

In addition to Barker and Alabama, other vegan celebrities are lending their support to the animal rights March of Silence. Moby, vegan entrepreneur Kat Von D and husband Leafar Seyer, “Bad Ass” vegan John Lewis, and others from the vegan celebrity community are standing in solidarity with animals. This is not the first time that Barker and Alabama have spoken up for animal rights together. In February 2017, the pair participated in a campaign for international animal rights organization PETA (People for the Ethical Treatment of Animals) called “Make Some Noise for the Animals,” where they explained how their respect for animals is the driving reason behind their decision to lead a compassionate lifestyle.

“Together, we can create a world FREE from unnecessary suffering.  We must do this- for the animals.  If not we must do this to create a compassionate world for ourselves,” continues the event’s mission statement.

The March of Silence was organized by a coalition of Los Angeles-based animal rights activists who seek to unite like-minded individuals who, together, will walk together in silence in order to deliver a message to on-lookers. Event organizers ask that all who partake in the event walk peacefully and silently, with tape over their mouths, embellished with a bar-code to represent animals as commodities, in contrast to chants and shouts that are typically associated with events.

The March of Silence is set to take place on September 12 at Grand Park in downtown Los Angeles. Those interested in staying up-to-date can do so by joining the official Facebook group.