We recently caught up with Joey Carbstrong at the Truth Riders launch event in Melbourne. Truth Riders is a form of activism that seeks to raise awareness through billboards which are pulled around the city by bicycles. As the boards can be cycled by anyone, yes, even you can pull it behind your bike, Truth Riders hope to reach hundreds of people everyday with their vegan message. The current message is one that provokes thought and raises awareness in a very subtle way. 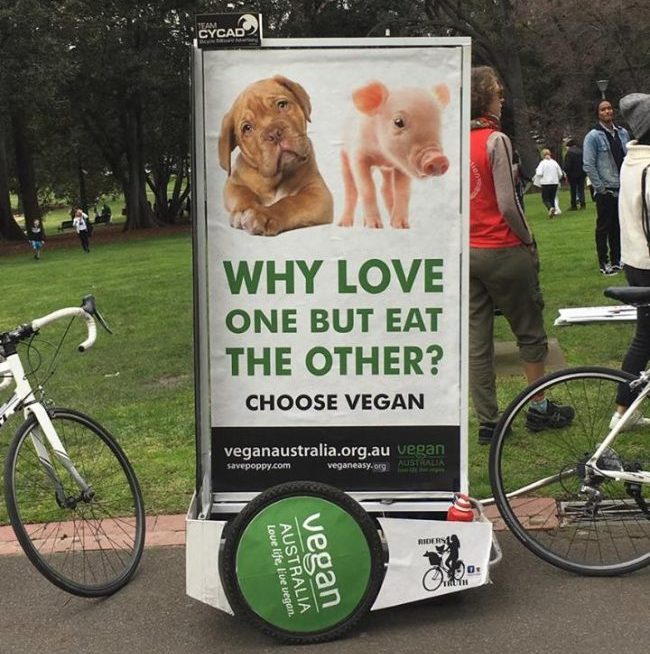 Animal rights activism comes in many forms from peaceful marches, supporting relevant petitions, joining animal protection organisations, holding vigils for animals outside slaughterhouses, to taking to the streets like Anonymous for the Voiceless. Not all of us want to get involved with traditional methods of activism and not all of us have time. By creating billboards which can be attached to any bicycle Damian Bloomfield and Ella Eloisa the Co-Founders of Truth Riders believe they are opening up activism to a wider audience.

“We can take activism to the masses by attaching a billboard or poster with a vegan message to just about anything with wheels; and that’s just the beginning for Truth Riders.”

Working with Vegan Australia they have created 3 billboards so far but as a charity they are looking to raise funding  to purchase 3 over the next few weeks. They are inviting people to donate so they can continue to do the work they do. Whether you consider yourself an activist or not when you think about the benefits for animals, society and the environment it makes it hard not to feel compelled to do something, even if it is a little something.

For Joey Carbstong this is taking to the streets around the world. Citing the hypocrisy of being an animal lover yet still eating meat, fish, dairy and eggs, Joey Carbstrong made it his mission not just to become vegan but to stand up for the animals he loved by becoming an activist. As a prolific talker Joey uses his charm to educate and inform the general public, often using non-vegan topics such as world peace, karma and religion to start engaging discussions with people. He gave a passionate speech at the launch event about his experiences and we caught up with him to find out more.

Truth Riders will be launching similar events across Australia and you can check them out on Facebook, Twitter, Insta and Snapchat.