The Vegan Society has launched a new nationwide campaign, Catering for Everyone, which calls on UK citizens to reach out to their local council and ask them to provide more vegan options in the public sector. The campaign will be followed up with a petition to the government in the summer, requesting legislative change that “ensures that across the public services, vegans and non-vegans alike can access healthy vegan food,” The Vegan Society’s website notes.

With many local elections coming up in May, the campaign is the “perfect” opportunity to contact local councilors and ask them to lead by example – whether it’s by requesting vegan options in their own canteen or by putting pressure on public sector institutions in the area to do the same.

“By public sector canteens, we mean places like hospitals, schools, prisons, universities, workplaces etc. Basically, anywhere where you go, not out of choice, but because you have to eat,” Dominika Piasecka, a spokesperson for The Vegan Society, told The Independent. “As a patient in a hospital or as a university student you don’t always have a choice of where to eat, and it’s a problem if there are no vegan options.” 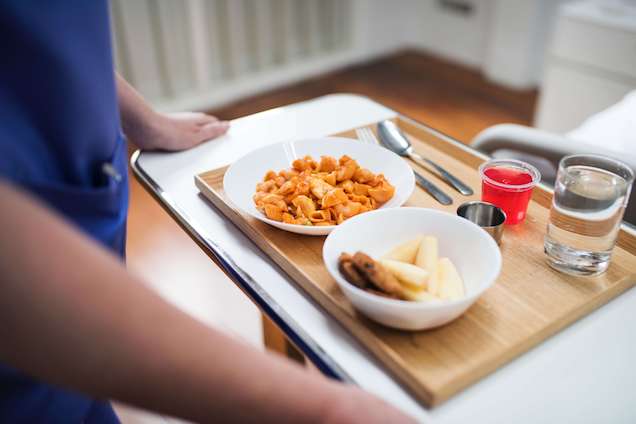 “Veganism is protected under human rights and equality law, meaning vegans have the right to suitable, animal-free catering in public sector setting,” she added.

In the last two years, the number of vegans in the UK has risen by seven hundred percent; there are now over three and a half million vegans living in the country today. What’s more, over seven million people are now vegetarian, and many others are simply reducing their meat intake for health and environmental reasons. In January, it was reported that in 2017 over a quarter of UK meals contained no meat or fish. According to Kantar World Panel, which conducted the research, the results indicate that a more conscious, plant-based lifestyle is becoming “mainstream.”

“It’s important to remember a vegan food option isn’t just for vegans,” Piasecka continues. “It often constitutes a safe dietary choice for everyone. We encourage people to get in touch with their local council, asking them to influence procurement across the public sector.”

For information on how to get involved with the campaign, see here.