On March 26, Brian May, guitarist for the rock band Queen, joined representatives from major UK animal welfare organizations to deliver a petition with over 400,000 signatures in support of the Fur Free Britain campaign. Parliament is required to review any petitions with a minimum of 100,000 signatures and has set a date to discuss the issue on June 4.

Fur Free Britain is longstanding campaign to ban the importation of fur in the UK. Although the government banned fur farming in 2000, it still accepts fur imports from other nations. The campaign was organized by a conglomerate of animal welfare organizations, including Humane Society International, Animal Aid, and PETA. It was also widely supported by the public, celebrities, and major corporations. Thirty-one major British celebrities signed an open letter to Prime Minister Theresa May, requesting her to consider this fur ban. Notable stars include Ricky Gervais, Twiggy, Judi Dench, Andy Murray, and Evanna Lynch. 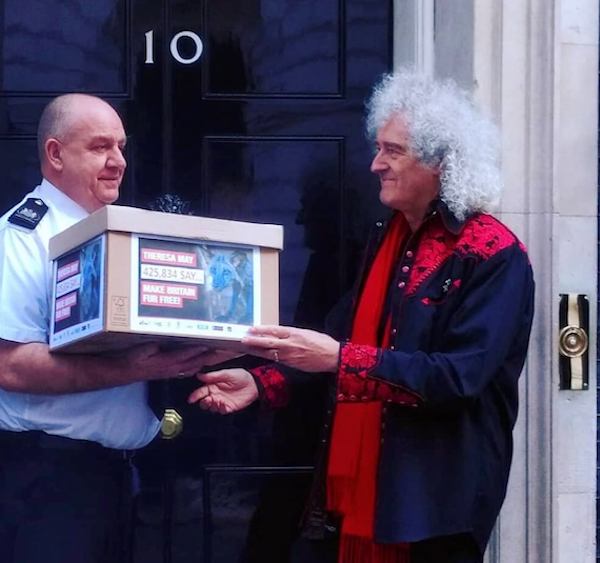 On the business side, Lush, a vegan cosmetics and bath company, partnered with HSI in November 2017 on a fur trade public awareness campaign, #WhattheFur. All UK Lush stores hung anti-fur posters in support of the Fur Free Britain initiative.

Upon delivering the successful petition to parliament last week, a Fur Free Britain spokesperson said, “Hundreds of thousands of British people have supported our call for a Fur Free Britain, so we hope Mrs. May will take decisive action to address the current double standard on fur cruelty.” The spokesperson continued, “Britain made its stance on fur clear almost two decades ago by banning fur farming because it’s unethical, so it makes no sense to still be importing hundreds of millions of pounds of fur from animals who have endured horrific cruelty in other countries. It’s time the UK pulled the plug on the fur trade.”

Many western European countries, as well as Isreal, have implemented similar fur farming bans, though none have enforced a comprehensive ban on fur importation. Parliament will publicly discuss the merits of the Fur Free Britain petition and consider potential future action on June 4, 2018. Constituents can view the conversation online.