Described as “the world’s first ever Vegan BBQ” on the brand’s website, the new grill is “designed to cook corn on the cobs, peppers, Shroomdogs, and more to flame-grilled perfection.”

“With the temperature set to hit 30C this week, this bargain BBQ is the best way to rustle up a home-cooked vegan feast for family and friends in your back garden,” the chain adds.

Costing £9.99, the round steel charcoal BBQ is the cheapest version of the product the catalogue retailer has available.

“We wanted to ensure we’re always catering for all the foodies out there, and therefore have launched a BBQ specifically for vegans,” one spokesperson from Argos told The Sun. “By purchasing this BBQ it means that vegan food (veggies and so on) won’t be contaminated by other meat/non-vegan foods.”

According to research firm Mintel, vegan grilling is set to be a big UK trend this summer. Many people across the country are choosing to avoid animal products for their health, the environment, and for animal welfare reasons — in the last two years alone, veganism has increased by seven hundred percent. 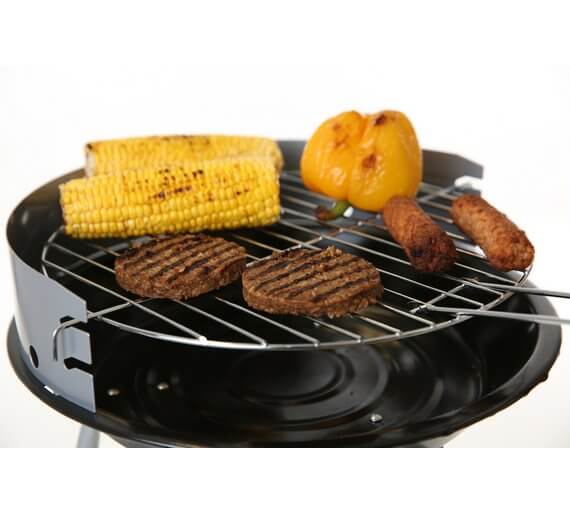 “Vegan options are on the rise,” said Melanie Zanoza Bartelme, a global food analyst for Mintel. “With several UK retailers such as Sainsbury’s, Tesco and just recently Waitrose launching extensive vegan lines in their stores.”
She continued, “flavour-bursting new varieties of vegan alternatives made from innovative ingredients like Indian jackfruit, which due to its texture and flavour is becoming an increasingly popular meat substitute, will be the star of the vegan [BBQ] this summer.”

Asda is another retailer catering to growing demand in the UK for more plant-based foods. In May, the chain launched a brand new range of vegan products — marketed as ideal for summer BBQs.

“We’re committed to catering for the growing number of Asda customers following a vegan diet,”  said Asda chef Andrew Johnston in a statement. “We wanted to introduce more delicious and innovative vegan-friendly foods so that everyone can enjoy tasty meal options at the BBQ this summer.”