UK supermarket chain Iceland is taking a stand for rainforests and orangutans by becoming the first major supermarket to cut palm oil from its own private-label products.

The chain hopes to phase out palm oil from Iceland-brand products in all 900 of its stores by the end of the year. The ingredient was present in more than half of the products and eliminating it from own-brand products would reduce the amount of palm oil used each year by 500 tonnes, the company said. It will be replaced with ingredients that “do not destroy the rainforest.”

“Until Iceland can guarantee palm oil is not causing rainforest destruction, we are simply saying ‘no to palm oil,’” Iceland managing director Richard Walker said in a statement. “We don’t believe there is such a thing as guaranteed ‘sustainable’ palm oil available in the mass market, so we are giving consumers a choice to say no to palm for the first time.” 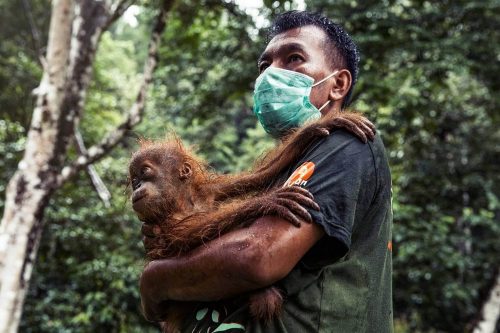 Palm oil is a highly contentious ingredient present in a number of common household products due to its cheap price, such as snacks and personal care items. A majority of the world’s palm oil is produced in Indonesia and Malaysia, where rainforests are routinely cleared to make room for palm oil plantations. The WWF (World Wildlife Fund) estimates that up to 300 football fields worth of rainforest are cleared every hour in Indonesia to make room for plantations.

The production of palm oil has had an adverse effect on the native wildlife. As rainforests are cleared, many animals such as orangutans, rhinos, elephants, and tigers are left displaced, endangered, or in danger being exposed to the illegal wildlife trade.

In addition, toxic chemicals and fertilizers in palm oil production are known to seep into nearby rivers and terrain. The US Department of Labor has named palm oil one of the top four worst industries for forced child labor.

The decision closely follows the brand’s decision to phase plastic out of all of its own-brand products by 2023.

Walker noted that moving away from palm oil would increase costs, but it will not affect customers: “There will be an extra cost but we think it’s the right thing to do.”