This summer, not only is the Linda McCartney Food’s chilled range getting a fancy packaging overhaul, but some of the vegan products will see new product placement at UK supermarkets Sainsbury’s and Waitrose.

The supermarket chains will be stocking up on four vegan products from the range this June: the Vegetarian Duck Meal Kit, Vegetarian Scampi, Vegetarian Meatballs, and Vegetarian Sausages. 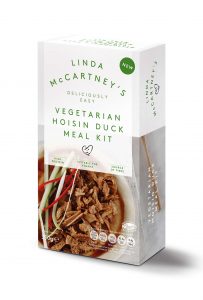 British food brand Linda McCartney Foods was created in 1991 by the late Linda McCartney (1941 – 1998). McCartney was an entertainer, activist, and wife of ex-Beatle, Paul McCartney. The vegetarian couple was in the band Wings together.

Although the company is now part of the Hein Celestial Group, the McCartney family remains involved in its development, as well as in other veggie initiatives. In 2009, Paul McCartney and his daughters Stella and Mary launched Meat Free Monday, a not-for-profit campaign to encourage people to have at least one meat-free day a week. Stella, is also a driving force in the fashion industry, designing sustainable and cruelty-free fashion for stars including Miley Cyrus and most recently, a wedding reception dress for Meghan Markle. 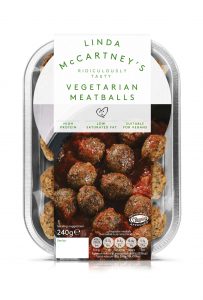 Plant-based meat has been shown to be useful for people who are transitioning to a veggie or vegan diet, according to the director of clinical research, Hana Kahleova, for the Physician’s Committee of Responsible Medicine (PCRM). “Processed plant-based foods like veggie sausage, bacon, or vegan cheese can be useful for some to use as transition foods, because they provide the taste of animal products people are accustomed to consuming, with fewer health risks,” said Kahleova. “While they may not be as healthful as whole plant foods, they’re often much lower in cholesterol, fat, and saturated fat than animal-based foods.”

In addition, a recent report by Research and Markets found that the global marketplace value of vegan and vegetarian meat is set to exceed $6 billion by 2023, while another report released this month concluded that vegan and vegetarian products are no longer considered niche; they have gone “mainstream.”

With this in mind, supermarkets across the world are starting to stock up on more vegan products to meet consumer demand. UK supermarket Tesco recently stocked up on (and sold out of)  Vivera Vegan Steak, and Australia’s largest supermarket, Woolworths, announced last month that it will soon launch a high-quality vegan range.