The eastern European nation of Ukraine has seen a year over year decline in both meat and milk production, according to statistics released by Open for Business, a site focused on business news from Ukraine. According to the report, Ukraine milk production declined by 1.8 percent over the past year while meat production fell by a minor 0.6 percent.

The decline in milk production was further detailed by CLAL, an Italian dairy consulting firm that analyzes the market for dairy products across multiple countries. According to CLAL’s most recent data on Ukraine’s dairy sector, fluid milk production has seen a steady decline over the past few years, most notably in 2015, which saw a 4 percent decline in overall production. Additionally, domestic consumption of cheese fell by 3.2 percent between 2017-2018.

The Foreign Agriculture Service (FAS) of the USDA noted in “Ukraine: Dairy and Products Annual” that milk production is expected to continue to decline in 2018. Though the nation exported higher volumes of butter, domestic consumption of dairy has declined. 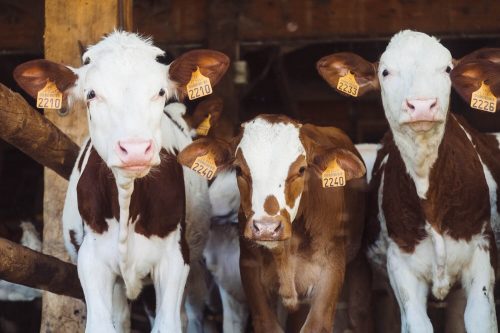 As predicted by the FAS in the 2017 “Ukraine: Livestock and Products Annual,” production of red meat fell due to“weak domestic demand” and pork production reached an all-time low, likely due to multiple cases of African Swine Fever registered throughout the country. According to a review of Ukraine’s meat sector conducted by the FAO (Food and Agriculture Organization of the United Nations), the importance of meat in  Ukraine’s economy has been steadily decreasing over the years, albeit as the nation, like China, seeks to move further into industrialized meat production.

While Ukraine seeks to bolster its economy with factory farming, the demand for vegan products in Europe. Additionally, new options for plant-based food entering the market may disrupt consumption of meat, milk, and other animal products. Earlier this month, U.S.-based food tech company JUST announced a partnership with the Eurovo Group, Europe’s leading producer of eggs, to bring its vegan liquid egg to the European market as well as restaurants and other foodservice outlets.

California-based plant-based meat brand, Beyond Meat, partnered with a major poultry producer PHW Group to bring the vegan Beyond Burger to Germany, likely the first of several European partnerships. The vegan Beyond Sausage is expected to debut in Europe next year. Recent research shows that vegan meat is finding favor with European consumers, which led to a 451 percent spike in sales of plant-based meat products over a four-year period.