Earlier this week President Donald Trump announced that the US would be withdrawing from the Paris Climate Agreement.

What Trump called a ‘draconian’ international deal is actually an effort to reduce global warming. However, despite the US being the world’s second-largest emitter of greenhouse gases, the President dropped out, stating that the policies were a threat to American business and the economy.

Following the announcement, social media platforms have been flooded with outrage from across the globe.

The agreement, partially brokered by Obama, had predicted that the US could reduce their emissions by 26-28% from 2005 levels by 2025 so it is understandable that people are upset. 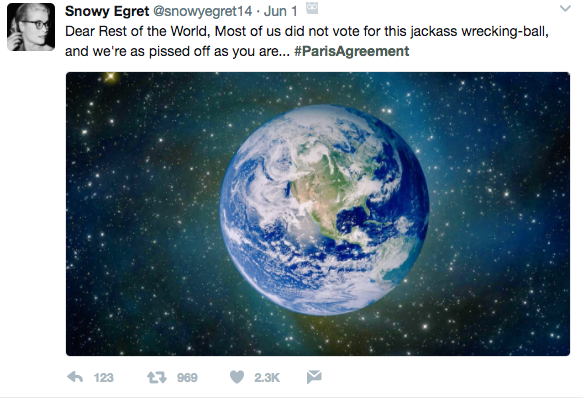 Moreover, according to an article by CNN, Obama had touted this Accord as the “best chance we have” to save the planet.

What’s interesting though, is that when averaging the numbers found in both the UN’s (1, 2) and World Watch’s climate change reports, the results show that a staggering 27% of global emissions come from animal agriculture.

With this in mind, it’s curious that we don’t see the same level of pubic frustration as we have with the Paris debacle.

Perhaps the indifference stems from denial?

Evaluating our own behaviour is never easy but with emissions from animal agriculture projected to rise by 80% within the next 30~ years (compared to 20% rise of energy related emissions), it’s probably time we did.

Many self proclaimed environmentalists express their frustration with the government’s lack of force when it comes to fighting global warming, but are angry tweets and witty protest signs enough to make a change? Are we guilty of just paying lip service, and ignoring the giant elephant in the room named Animal-Ag?

Ultimately whilst we may not be able to influence the decisions being made in the White House, as individuals we do have the ability to make a positive impact on the environment.

Environmental Benefits of a Vegan Diet