Weed and hemp-based products are gaining traction in 2019. Fear mongering caused by early 20th-century propaganda films – like 1936’s iconic “Reefer Madness” – and the war of drugs are slowly being chipped away as more turn to CBD and THC products to help them chill out.

Likewise, the fact that women can and do enjoy sex (which doesn’t always involve men or other people), is something people are finally willing to admit. Canadian brand HighOnLove wants to help erase both the social stigma of getting high and women’s sexual pleasure.

The brand was founded by Angela Mustone, who has a long history of selling novelty products in the adult industry. HighOnLove’s product line, which is vegan and cruelty-free, features bath oil, massage oil, lube, and dark chocolate body paint.

There are two lines – one infused with hemp seed oil and the other with THC. Beyond getting high, apparently cannabis can enhance your sex life.

“The hempseed oil products will promote the production of natural lubricants along with giving you that a greater, deeper and intensified orgasm,” Mustone told LIVEKINDLY in an email. “While hemp gives you that one big final ending, THC stimulates the libido and multiplies the orgasm.”

“We also added CBD in some of our products as it is an anti-inflammatory, increased circulation and decreases discomfort/pain during intercourse,” she continued. 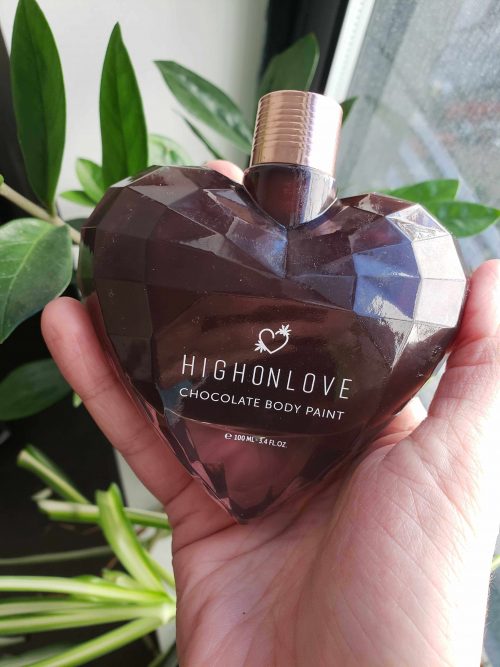 Due to differences in substance regulations between Canada, where recreational weed is legal nationwide and the US, where legalities vary from state-to-state, THC-infused lubricants are kind of new.

But, there are some vegan brands on the market that offer hemp-infused lube, like Uberlube and Foria (which also makes both CBD and THC lines). If you’re not looking for either of those things, there’s also good ol’ fashioned vegan lube.

Turns out, this is backed by science. A study published in the Journal of Sexual Medicine in January 2017, titled “The Relationship Between Marijuana Use Prior to Sex and Sexual Function in Women,” surveyed 133 sexually active adult women.

As for CBD, a growing body of research shows that it can curb anxiety, pain, and a number of other conditions which can also benefit your sex life.

HighOnLove sent me their THC-infused dark chocolate body paint to try. I discreetly shared that fact with a friend, who told me “that sentence kept getting more interesting.”

The heart-shaped glass bottle is packaged in a pastel pink box with a thin paint brush to create vegan chocolate art on your consenting, chosen person’s body. The opening of a bottle has a stopper to prevent any spillage, which you can dip the paintbrush into.

When poured out, it has a slightly thick, syrup-like texture and a rich, chocolatey flavor. Compared to other chocolate body paints, HighOnLove’s doesn’t need to be heated into a paintable texture before you use it and you don’t need to re-melt it when it solidifies.

And it tastes pretty good – full disclosure, I tried it on vegan ice cream too. Terpenes, the essential oils that give flavor to cannabis, were detectable, but there isn’t an overwhelming “weed” flavor like in other edibles. The 100 ml bottle contains 200 mg of THC – the “standard” dose for edibles is about 10 mg, according to Leafly.

As someone who’s experienced with edibles, I was skeptical about whether it would work in an intimate setting. Would its effects be pleasant, or would I feel lost in the space-time continuum, like that time I ate that second brownie because I didn’t feel the effects after 20 minutes (pro tip – always wait at least an hour).

It’s all about timing. Edibles take some time to kick in, but I felt a mind and body high after about 20 minutes of having about a tablespoon’s worth of HighOnLove’s dark chocolate body paint. To be candid, it did work for me.

According to Mustone, combining vegan chocolate, THC, and body paint comes with another bonus: “Chocolate is known to be an aphrodisiac in itself.”