French cuisine is known for its liberal use of animal products. From mother sauces rich with butter to egg and cream-filled desserts, one might find it difficult to navigate the country on a vegan diet. However, a few mobile apps are now available to help conscious consumers to find vegan options in the palm of their hand. The Vanilla Bean App, somewhat new to the scene, is now available in France.

Vanilla Bean launched in 2015. It mirrors the premise of the original vegan restaurant finder, HappyCow, which set the gold standard for this kind of service, inspiring others to follow suit.

Like HappyCow, the app features a database of thousands of restaurants from hundreds of cities around the world. Users can then filter their search based on their location, restaurant type, and diet preferences. It also includes omnivore establishments that are vegan-friendly, which broadens the reach. Users have the option to narrow their search by categories such as Raw and Gluten-Free. Unique to Vanilla Bean, users can also filter by Local Ingredients and Fair-Trade. Both apps offer the ability to filter by price point. 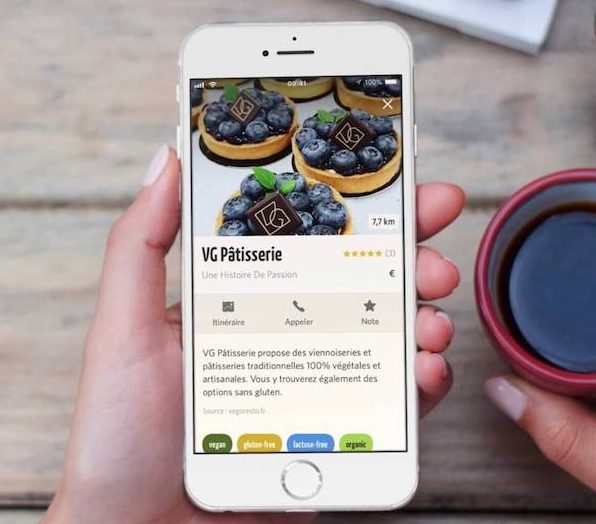 In Paris alone, the app recommends 40 eateries, from vegan-friendly bakeries and cafes to more upscale restaurants. The company states the app is ideal for the vegan traveler, but also for locals who have recently adopted a plant-based diet, and even longtime vegans looking for something new in their neighborhood.

While chefs and bakers have worked to veganize French cuisine in the US and the UK, the country itself has remained close to its traditional foods of boeuf bourguignon and croque madames. However, this attitude is changing, at least among consumers, according to Bloomberg. The publisher cited statistics suggesting that beef consumption has dropped by more than 20 percent since 2000, while plant-based protein sales increased by 82 percent in 2016. A French author and animal advocate, Geoffroy Le Guilcher, told the outlet, “French consumers are finally waking up, decades after everybody else. A new generation of activists is making people realize that even in the land of meat, there is very little that makes the case for having it.”