After operating out of a 3,500-foot commercial kitchen for three years, Veestro has expanded to a 20,000-foot kitchen in downtown Los Angeles to upscale production and distribution. The business now runs a corporate catering program in Los Angeles and intends to expand its offerings across the nation in due time.

Founder Mark Fachler started the business in 2013 and was later joined by his sister Monica Klauser, who worked as a marketing figurehead. Notably, at this time Veestro was not an exclusively plant-based brand.

Fachler, a former investment banker, was working long hours and struggled to maintain a healthy eating regime. “It started taking a toll on me,” Fachler explained to California Business Journal. “I started gaining a lot of weight, started having a lot of skin problems. I was waking up really tired. I looked everywhere, and I couldn’t find anything that was healthy enough for me.”

The brother-and-sister duo said they sampled Blue Apron’s vegan meal options but found it didn’t offer the convenience or fast start-to-finish time they were pursuing. 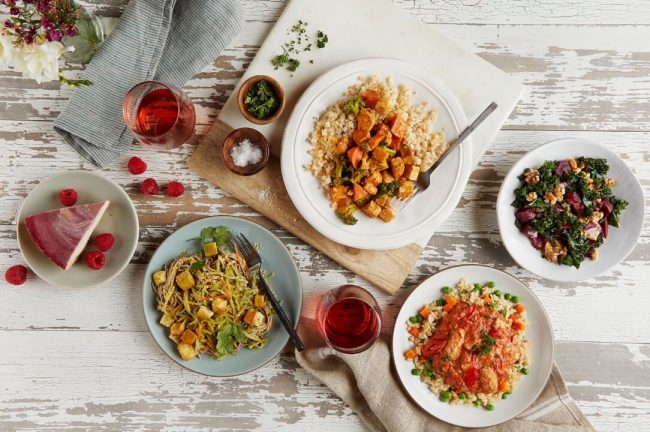 Ultimately, the entrepreneurs decided to transition all of Veestro’s offerings to plant-based ones. An awareness of the positive environmental impact that vegan food poses and a desire to reconnect with their roots contributed to the decision. Fachler explained that the pair grew up in Costa Rica and were raised on a vegetable-rich diet. “We ate mostly things made with plants, veggies and legumes. We were used to that kind of food, and we wanted to get back to our roots,” he said.

During their nutritional research, Fachler and Klausner stumbled upon a groundbreaking nutrition book by renowned author and physician T. Colin Campbell, titled “The China Study.“ Klausner said the book changed their perception of food. “The science in that book is so compelling for why a plant-based diet is the way to eat,” she said.

The siblings highlighted that Veestro’s offerings aren’t just aimed at people who typically eat a vegan diet. “It doesn’t matter if you only eat plant-based a few times a week,” commented Klausner. “It doesn’t have to be all or nothing; it can be a combination. Food is a pleasure, and you’re supposed to enjoy it. It’s [the frozen meals] there for the days when you get home, you’re tired, and just want to grab something out of the freezer.”

Veestro is not alone in this idea. As demand for plant-based food takes off across the globe, a growing number of services are catering for vegans and non-vegans alike. UK-based meal delivery service allplants revealed half of its customers are meat-eaters, while Glasgow in the UK and Australia’s Gold Coast are home to similar vegan meal delivery services.