Jane Velez-Mitchell is a dynamic, unapologetic voice for the voiceless. As an NYU graduate with decades of journalist experience, she has dedicated her life to exposing the truth and informing the public about the issues mandating their attention. Although her career did not begin within the vegan movement, she has relied upon her vast professional experiences and vivid personality to champion the vegan cause and shed light on the very real atrocities committed against animals every single day. LIVEKINDLY sat down with Velez-Mitchell over a plate of vegan slutty brownies to discuss her vegan journey, her activism, and the power of social media.

Velez-Mitchell grew up in a “mostly” pescatarian household. She converted to vegetarianism as a young adult after “reading and hearing about things and just became absolutely horrified by the images of factory farming and animal experimentation.” 21 years ago, she interviewed Howard Lyman, author of “Mad Cowboy,” as a local LA news anchor. After the interview, Lyman walked over to her and asked if she ate dairy. When she affirmed that she did, Velez-Michtell recalled, “He pointed his finger at me and said, ‘Liquid meat!’ And that was the moment I went vegan. I’ve never, never looked back.” 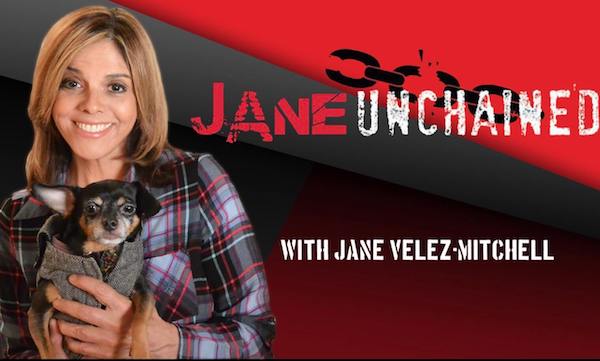 Velez-Mitchell continued to work as an anchor and news reporter for the next several decades, but she became frustrated with the lack of coverage related to animal issues. “There’s a mainstream media news blackout on animal welfare and the vegan lifestyle,” she stated. “We need more vegans and animal activists in mainstream media.” Although she requested to cover animal-related news several times, and was eventually granted a weekly segment to report on such issues, she still was not satisfied with the overall coverage by other news sources. “Mainstream media is pretty much a barometer of where people are at. It’s not pushing the envelope,” she explained. And if anyone is remotely familiar with her work, she likes to push the envelope.

Following her television news career, Velez-Mitchell launched Jane Unchained in 2015, a media platform focused on covering animal rights issues and celebrating the triumphs of the plant-based movement. “I use my standard journalist knowledge and skills to do animal rights vegan stories,” she said. As a former news anchor, her expertise lies in live coverage, so she always “goes live” when reporting from an event. Her social media tool of choice is Facebook Live. “Facebook Live is a miraculous thing for anyone trying to get a message out,” she claimed. In addition to filming hard-hitting situations, such as the weekly Los Angeles Pig Save vigils, she also attempts to raise up vegan food with her daily Lunch Break Live cooking show. Every day, she hosts a vegan leader in her kitchen who cooks a vegan dish and demonstrates just how delicious, simple, and varied vegan cuisine can be.

Velez-Mitchell takes both a hard and soft approach to her activism. When asked how she balances the gory truth without pushing others away, she said, “Try everything. Different people respond to different stimuli…As long as it’s not violent and it’s peaceful. Let different people do what they’re inspired to do. Do it all.” She also encourages everyone to elevate their activism with social media. “Take whatever you’re doing and supersize it with social media,” she advised. “Because of social media we all have an incredible opportunity to be a journalist today. Anybody with a cell phone an be journalist and tell the story.”

Velez-Mitchell finds inspiration from other activists and organizations working to make a positive change in lives of animals. She is particularly focused on factory farming, as she believes that is where the most injustice occurs. She noted that PETA, peta2, and the Save Movement are doing excellent work in regards to fighting for farm animal welfare.

She’s also a strong supporter of vegan entrepreneurs and plant-based companies who are creating innovative products in the food industry. “Meat alternatives, lab meat, and dairy alternatives are the key,” she said.

“Our biggest challenge are the entrenched, dinosaur fast-food companies that are basically flipping us off and saying we should be doubling down on bacon and cheeseburgers. Unfortunately, we live in a fast-food culture. I don’t think that’s going to change. The question is: how do we disrupt these industries that do not want to step into the future?” Velez-Mitchell mentioned White Castle’s recent addition of the Impossible Burger, and applauded this company’s open-mindedness.

To conclude on a lighter note, we asked her what her favorite vegan restaurants were (she admitted earlier that she’s not much of a home cook). After much deliberation, “there’s so many!”  Velez-Mitchell exclaimed; she named Au Lac, Stuff I Eat, and Plant Power Fast Food as a few favorites.