Vegan actor and activist Alec Baldwin has written a letter voicing his opposition of a proposed SeaQuest Interactive Aquarium on animal welfare grounds. Local news source the Massapequa Patch reports that the aquarium recently sought permits to open an “interactive” facility in the Westfield Sunrise Mall in the town of Oyster Bay, Long Island.

In a letter co-written by Baldwin and international animal rights organization PETA (People for the Ethical Treatment of Animals), the actor expressed is opposition to the “awful operation.” SeaQuest has locations throughout western states and in Florida.

“The owner of this sleazy chain, Vince Covino, has not only flouted the law nearly everywhere he goes but also left untold animal suffering in his wake,” the Long Island native wrote. “Covino and SeaQuest have faced scrutiny from a state finance agency, a state wildlife agency, and a state agriculture agency. Allegations of animal neglect have followed him from Oregon to Nevada to Colorado.”

Covino’s list of trespasses includes receiving a cease-and-desist from the Colorado Department of Agriculture last July on the grounds of operating its new aviary exhibit without a permit. As reported by local news source KDVR, the order came after state inspectors flunked SeaQuest’s exhibit three times since June 14. Undercover footage captured by the department sparked concerns over the safety and welfare of SeaQuest’s captive birds.

“It was also fined by the Colorado Parks and Wildlife Department for importing three mammals into Colorado without permits,” Baldwin added. 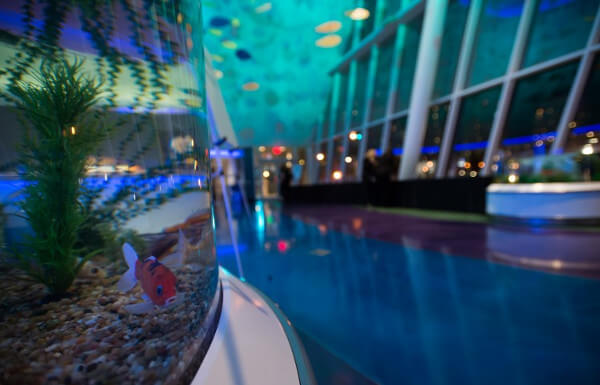 SeaQuest’s shady operations aren’t limited to just Colorado. In April 2017, Covino was ordered to pay $5,000 to the state of Idaho for raising investment money for aquariums in three other states. At the time, the Idaho Statesman reported that Covino’s brother Ammon was also involved in unlawful activity; in 2013, he was imprisoned for conspiring with an Idaho Aquarium co-founder to bring illegally captured spotted rays and lemon sharks to Boise.

“Former employees at Covino’s aquariums have come forward to report appalling neglect and abuse, including animals who were reportedly starving and routinely denied veterinary care,” Baldwin continued. “One former staffer said that he saw ‘at least 300 animals‘ die at the SeaQuest Las Vegas location. At the now-closed Portland Aquarium owned by Covino and his brother, Ammon, more than 200 animals reportedly died in just a few months—many allegedly from starvation, infections, and other seemingly preventable causes.”

Despite the content of the letter and the trail of news reports that implicate Covino’s hand in not providing proper care to SeaQuest’s animals,  he issued a statement defending his business in an October 2 meeting with the Oyster Bay Town Board: “We work with the state and federal authorities that regulate our industry to ensure that we have all of the proper permits.”

Newsday reports that Baldwin is not alone in opposing the SeaQuest location at the Sunrise Mall. On October 16, animal rights activists asked members of the Oyster Bay Town Board to reject the proposal. According to town spokeswoman Marta Kane, Oyster Bay has received 42 comments from residents so far, all of which ask that the permit be denied. The town  has not yet made a decision.

Even in the case of having proper care, many animal rights organizations maintain that there is no such thing as a “humane” zoo or aquarium. Many captive animals are known to suffer from zoochosis, a mental illness characterized by stereotypic behaviors like pacing, rocking back and forth, overgrooming, self-mutilation, and in some cases, disordered eating.