Evanna Lynch, actor and host of the popular vegan podcast “The Chickpeeps,” announced on Instagram yesterday that she’s getting ready to launch a vegan subscription beauty box.

In her Instagram story, the 26-year-old, who’s pictured with a fluffy, grey cat, said she wanted input from her fans as she plans the cruelty-free beauty box, which she said would likely be available by the end of the year.

The Harry Potter star has become an outspoken animal rights activist in recent years, lending her support to a number of animal welfare campaigns including one in April about the suffering animals endure in cosmetics testing.

Her podcast, which she hosts with ex-boyfriend and fellow Harry Potter star Robbie Jarvis, focuses on a range of vegan topics from interviews and profiles to stories on eating disorders, fashion, and being an athlete on a vegan diet. Lynch is set to be one of the featured keynote speakers at the Reducetarian Summit coming to Los Angeles this fall. 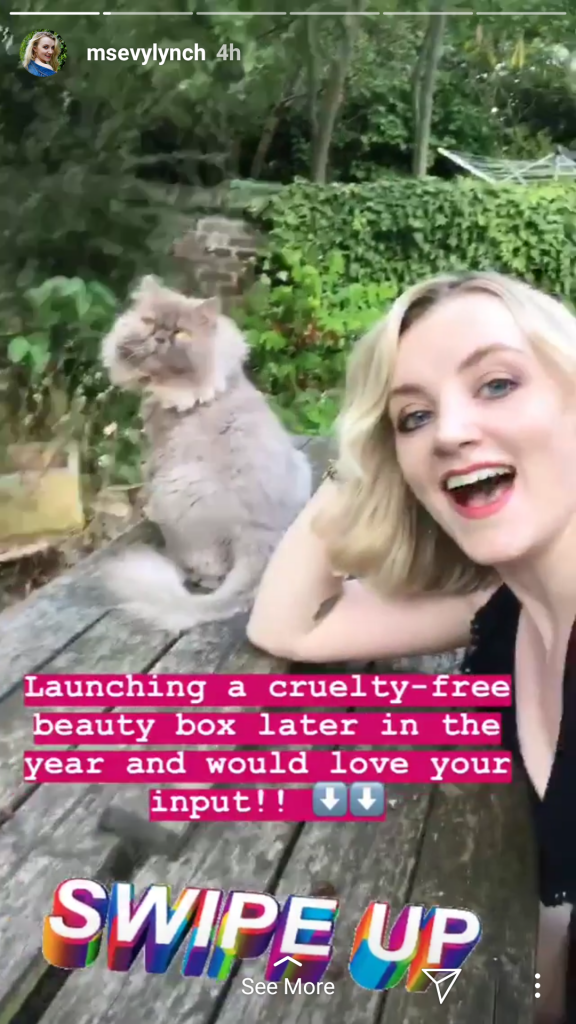 The beauty box announcement comes to emergent market; vegan and cruelty-free beauty options continue to be in high demand but a number of major beauty and cosmetics brands have been slow to end animal testing on cosmetics or swap out ingredients. Brands including Estee Lauder, Clinique, Maybelline, and Avon still have animal testing policies in place despite a number of alternate testing methods available.

Lynch joins a growing number of celebrities endorsing or launching products with a clean or vegan spin. Some of the hottest vegan brands have secured investments from celebrities — Leonardo DiCaprio has invested in Beyond Meat and Hippeas, for example — but brands attached to star founders can become their own blockbuster hits. Gwyneth Paltrow’s goop has become an Oprah-level benchmark in the beauty and wellness market. Moby is now a musician-turned-restaurateur with a successful vegan hot-spot in Los Angeles’s trendy Silver Lake neighborhood. Alicia Silverstone, another outspoken vegan actor, has several books, vitamins, supplements, and more under the Kind Life brand. Jessica Alba’s The Honest Company is now valued at just under $1 billion. Actor Jennifer Garner’s Once Upon a Farm line of fresh baby food is set to see a similar climb toward mainstream success.

But if Lynch is looking for an aspiration in the vegan beauty market, she may want to point her attention toward fellow vegan star Kat Von D. Her makeup business has seen unprecedented growth since she announced the switch to vegan ingredients in 2015. Von D has since expanded her focus; she recently leaked sneak peeks of the Von D vegan shoe line launching in November as the demand for vegan fashion and shoes continues to climb as well.

Lynch is also tapping into the cause-driven business model that a growing number of Millennials and Gen Z are seeking out in the marketplace with a portion of proceeds going to charitable causes.“The products aside, it’s important to me that a percentage of proceeds from each box will go directly towards benefiting one of my favorite charities,” Lynch says, “and I hope that’s important to you, too!”