The San Francisco Board of Supervisors has the opportunity to make history next week by approving a citywide ban on fur sales. Proponents of the ban are reaching out to the Board to ensure the ban is passed. Vegan actress Alicia Silverstone is one of many voicing their support.

Silverstone is a vegan actress, animal advocate, and native San Franciscan. She sent a letter to the Board to urge them to pass this fur-free ordinance. The letter highlights other municipalities who have already adopted similar bans, such as West Hollywood and Berkeley. However, if approved, San Francisco would be the first major city to ban the sale of fur.

The letter continues to point out the atrocities of the fur industry, and how the Board’s approval could make San Francisco a leader in fair, compassionate, and progressive government. Silverstone writes, “There’s so much violence in the world that’s beyond our control, but banning fur sales is one easy way to set an example of compassion for the whole world to follow.” She concludes, “It would make me even more proud to call San Francisco my home.”

The proposed ordinance was put forth by Supervisor Katy Tang to better align the city’s values with its practices. Tang initially brought the ordinance to light in December 2017, but it was postponed until just last week when it was approved by the Board of Supervisor’s Public Safety and Neighborhood Services Committee. However, to take effect, the ordinance requires the full Board vote. The proposal reads, “The sale of fur products in San Francisco is inconsistent with the City’s ethos of treating all living beings, humans and animals alike, with kindness.” 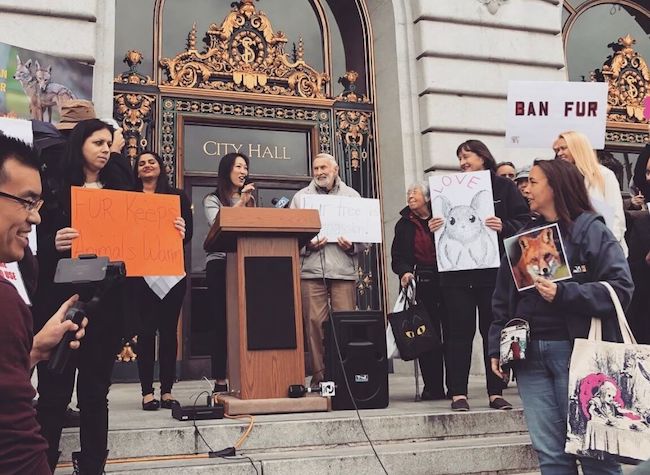 Despite pushback from the city’s Chamber of Commerce, the Board seems to be in support of the ban. Fellow supervisor, Jeff Sheehy, agreed with Tang, stating, “Raising animals for their skins is not right. It is not moral. It is not ethical. We are a city that leads. This is how we change the world.”

The Board will vote on this ordinance on Tuesday, March 20, 2018. If approved, the ban would take effect beginning January 2019. The full proposal is available through the Clerk of the Board’s website, and the meeting will be televised through the Board’s online portal. Constituents will have the opportunity to voice their approval of the ban during public comments.