Vegan, activist, and actor Alicia Silverstone is no stranger to animal rights advocacy. In the past, the actor has bared all in a Portland anti-wool campaign, urged thousands to go meat-free and partake in VegWeek, pushed for a ban on animal-tested cosmetics, and supported the San Fransisco campaign to ban fur sales.

Now, on top of all of this, Silverstone is showing her support for the protection of grizzly bears. The “Clueless” star, whose six-year-old son is named “Bear,” seems to have a soft spot for grizzlies.

Silverstone took to Instagram yesterday to remind her followers that bears are not trophies, but sentient beings. She wrote, “Trophy hunting Yellowstone grizzlies is cruel, senseless and unnecessary.”

Silverstone added that she would be urging Secretary Zinke, the US Interior Secretary, to “immediately restore” the Endangered Species Act protections to Yellowstone bears, and to stop the bear hunt in Wyoming and Idaho. Silverstone asked her followers to “swipe up” and do the same. 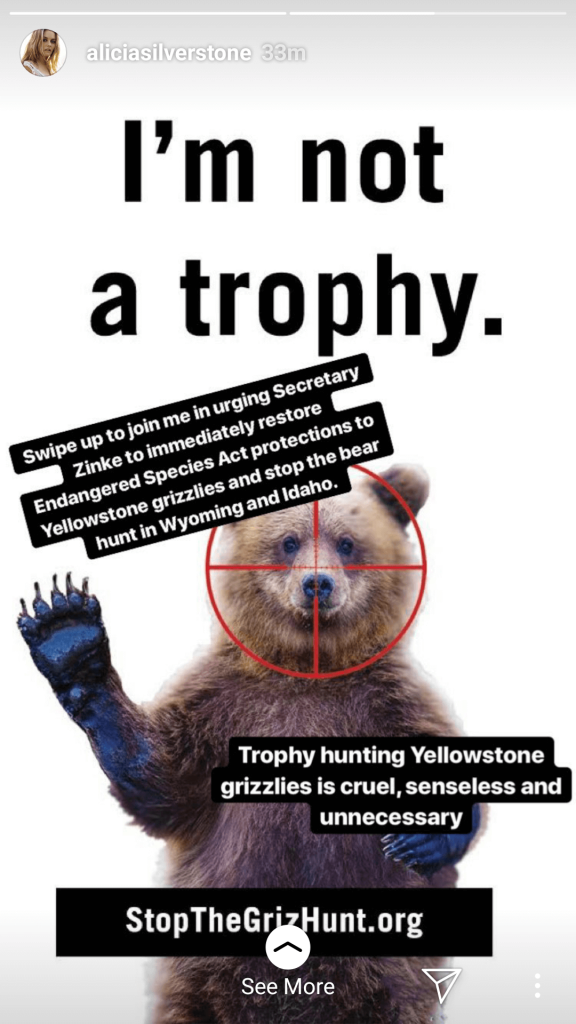 The link takes viewers to a petition demanding the restoration of the protective act. Under Zinke and the Trump administration, federal protections for grizzly bears have been stripped, enabling over 20 bears to be hunted this fall if they wander beyond Yellowstone National Park.

The website, campaigning for #NoGrizHunt, clarifies: “The last thing these bears need is to be hunted. Grizzlies in the lower 48 states occupy just a fraction of their historic habitat, surviving in isolated populations in places like the northern Rocky Mountains. The hunt comes as key food sources for grizzlies in the Yellowstone ecosystem are collapsing – and mortality rates have been increasing.”

The page then urges readers to “take a moment” to sign the petition, which reads: “Yellowstone’s grizzly bears are national treasures. We believe the Trump administration wrongly took away grizzly bear protections and now they’ll be hunted in Wyoming and Idaho this fall. These hunts will be cruel and unnecessary. We demand that you restore protections for the Yellowstone grizzly bear.”

To follow Silverstone’s lead and lend support to the cause, click here to add a signature to the petition and “Stop the Grizzly Hunt.”