Speaking to Bicycling Australia, Zeinab said he ate a large meal before bed, a big breakfast the following day, and then snacked during his daily rides, which covered an average of nearly 400 kilometres per day. Between meals and rest, the 24-year-old athlete consumed high-calorie nuts and Gatorade to fuel his journey. 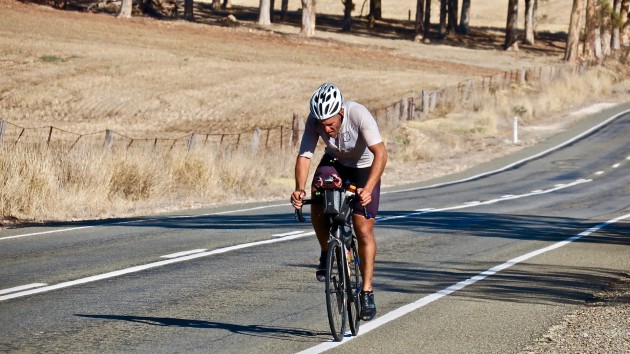 “After a few days everything tastes the same. Nuts taste like Gatorade and Gatorade tastes like Oreos, it all tastes the same – there’s no flavour,” said Zeinab, who added he ate at restaurants and slept in motels along the way instead of camping. He even made a stop at Australian fast food chain Hungry Jacks for a veggie burger, he noted “the tomato on that was so good and so fresh.”

Regarding his plant-based cycling-fuel, Zeinab commented: “You know it is hard to eat enough, but for example these two [375g each] packets of salted mixed nuts are high in calories and will get me the 178km to Adelaide.” He later mentioned he felt healthy throughout the race.

Last year, a shocking accident meant the Indian Pacific Wheel Race was cancelled. British ultra-cyclist Mike Hall was fatally hit by a car while competing in the event. Zeinab co-directed a 90-minute documentary about his late friend, and this year stopped for a minute of silence at the point of the race where Hall pedalled for the last time. The ultra-cycling event started up again this year, and commemorated the loss of Hall.

In recent years, a growing number of athletes have adopted a plant-based diet as awareness of its benefits increase. American professional soccer player and Olympian Alex Morgan recently tweeted, after eating solely vegan food for three months, she has “[w]ay more energy now! Don’t need as much sleep or coffee.”