US burger chain, Bareburger announced yesterday that all 12 NYC locations will be serving Beyond Meat‘s ‘bleeding’ plant-based, soy-free and GMO-free patty.

It’s not just those in the Big Apple that can pick up a vegan Beyond Burger; by the end of next month, Bareburger said all 39 of its stores will be serving the vegan burger. The chain says a fully plant-based Bareburger location is also in the works.

In addition to adding the plant-based burger, this popular burger chain is adding vegan entrees to its traditionally animal-heavy menu. A black bean burger, the Impossible Burger, and a quinoa patty will also join the Bareburger menu. Until now, no other chain has served both the Impossible Burger and the Beyond Burger; Bareburger’s menu newbies come as part of an effort to give guests a variety of choice.

Moreover, Bareburger is removing the wild boar and elk patties! 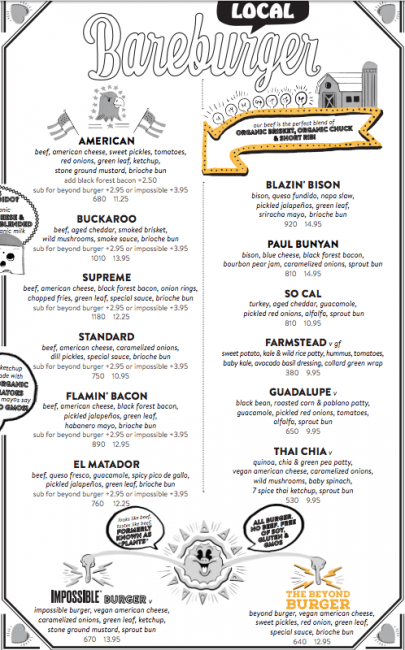 “The Beyond Burger at Bareburger is served on a brioche bun with vegan American cheese, sweet pickles, red onion, green leaf lettuce, and special sauce,” Beyond Meat said about the sandwich. “It can easily be modified for a vegan-friendly option under their ‘Be My Burger’ custom burger section, just ask for no special sauce and the multigrain bun instead.”

Bareburger has taken a significant step toward making vegan options more mainstream. One thing’s for certain: we are this much more excited to see what the vegan Bareburger chain will do next.