The “bleeding” Beyond Meat vegan Beyond Burger will be available in 350 Tesco supermarkets across the UK from August, the company announced at a press event today.

The burger will also be available for a trial period at Honest Burgers’ Kings Cross location from 10th July, after the chain tested the product on meat-eaters and received an overwhelmingly positive response. If the trial is successful, the company will launch the burger, which will be cooked on a separate grill to meat, in all 26 of its locations in the UK. The burger will also be available in Tesco cafes, launching in Cambridge first from 4th July. These launches mark the popular vegan burger’s first foray into Great Britain since the product first came to market in 2016.

Priced at £5.50 for two quarter pounders, the Beyond Burger will be available from both the fresh and frozen sections of Tesco stores. “The key for us is we don’t ever want to communicate we are exclusively for the plant-based community,” said Beyond Meat’s board chairman Seth Goldman at the press event. “Sometimes being in the meat section can alienate someone who never goes in the meat section.”

At Honest Burgers, the new vegan Beyond Meat patty will be priced at £10.95 and served in the style of a “Dirty American Cheeseburger.” Vegan Green Vie smoked Gouda, Rubies in the Rubble chipotle mayo, red onions, pickles, French mustard, and lettuce will be served with the burger, along with rosemary salted chips. Derek Sarno, the director of plant-based food at Tesco, said he is “super happy Honest Burger has taken [the Beyond Burger] on.” 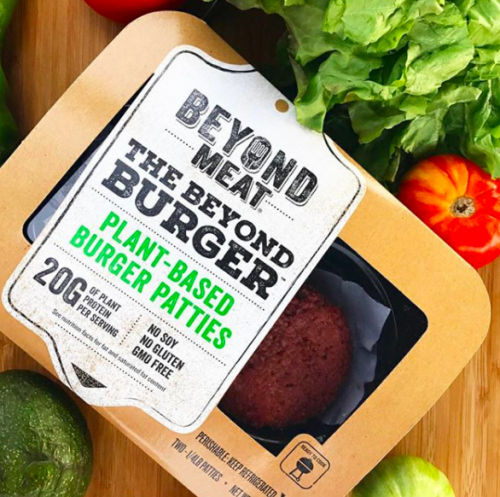 The news of the launch comes after Goldman revealed that the plant-based meat company was working on a global distribution plan that targeted fifty countries. Earlier this spring Beyond Meat announced a distribution partner in the UK, the Authentic Food Co., but it did not release distribution plans or dates, only rough estimates, saying the burgers would be in the region by August. The UK has the highest level of demand for the Beyond Burger than anywhere else in the world, Goldman stated at the event.

The launch date is not a moment too soon for British shoppers eager to taste the vegan burger that looks, cooks, and tastes like a traditional beef burger. Beyond Burgers contain more protein and iron than beef burgers but zero cholesterol and just half of the saturated fat. They’re GMO-free — the UK and EU have stricter regulations on genetically modified ingredients than the U.S., which will likely serve as a barrier for Beyond Meat’s main competitor, Impossible Foods. The Impossible Burger contains a genetically altered ingredient from soy, that gives the vegan burger it’s meaty taste and texture.

Sales for plant-based foods in the UK have been exceeding expectations, especially for Tesco. The supermarket chain launched its private label line of Wicked Kitchen ready meals from Wicked Healthy chef Derek Sarno in January. The retailer sold more than 2.5 million units of the meals in the first 20 weeks on the market, more than doubling the chain’s own sales predictions.

Beyond Burgers appeal to a wide audience; the company has been strict in requiring supermarkets to merchandise the burgers adjacent to meat cases in order to capture the attention of the “protein curious” consumer. And captured they have; the company has sold more than 11 million of the meatless burgers since they first hit shelves in 2016, and in a recent interview, founder and CEO Ethan Brown, said the Beyond Burger patties outsold all types of ground beef in a major Southern California supermarket chain over a five-week period.