The vegan Beyond Burger, a sustainable hamburger patty by plant-based meat company Beyond Meat, is a hit with A&W Canada customers. The burger has been available for a month – long enough for the initial buzz to dissipate – however, this vegan option is still outselling the massive chain’s classic beef burger in some Vancouver locations.

In an email to the Vancouver Courier, A&W Canada’s CEO Susan Senecal wrote, “In downtown Vancouver, some locations are selling more Beyond Meat Burger than our classic Teen Burger.” She continued, “Some guests have told us it’s now one of their favourite options at A&W.”

A LIVEKINDLY member and Vancouver local recently visited one of the A&W stores to get her hands on a Beyond Burger, but instead found a sign that read, “Dear Burger Lovers, Our new Beyond Meat Burgers are so popular, we have temporarily SOLD OUT! We will be back in stock in a few weeks.” She asked the staff for additional information and was told that the company was handing out half-off coupons to those who came for the coveted plant-based patty. 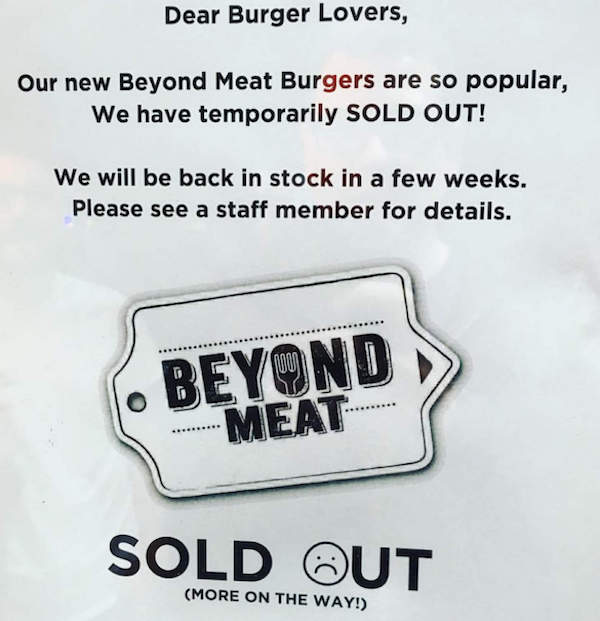 The A&W Canada version of the Beyond Burger is not strictly vegan but can be made vegan by request. The sandwich comes with A&W seasoning, tomato, lettuce, red onion, pickles, ketchup, mustard, and mayonnaise all layered between a vegan sesame bun. The burger can be “veganized” by asking for no mayo; however, the restaurant does note that the patty is cooked on the same equipment as the meat.

Beyond Meat is working on scaling its production, as the global demand for its products have outpaced current production capabilities. In late June, the company announced the opening of a new facility in Columbia, Missouri, which more than tripled its output, and created hundreds of new jobs in the process.

This isn’t the first instance of the Beyond Burger outselling meat. CEO Ethan Brown has claimed that the burgers have consistently outsold any specific meat item in some Southern California supermarkets, an accomplishment made possible by the fact that Beyond Meat products are sold alongside meat, not in the vegan alternative section.