The rock star of the burger world, Beyond Meat’s vegan Beyond Burger, is seeing rapid growth in Hong Kong since its debut there last year.

According to recent sales data, the California-based company has quadrupled its sales in the region, mostly due in part to the work of Green Monday, a campaign that promotes meatless meals once a week.

Hong Kong, like much of Asia, has a strong history of meat-eating. But the Beyond Burger is doing there what it does so well in the U.S., too — it’s reaching meat-eaters opting for healthier food options that don’t sacrifice on taste.

“The majority of our patrons are meat-eaters,” David Yeung, who runs the Green Monday campaign and its flagship markets, Green Common, told Food Navigator. “The novelty, taste and clear benefits are the main reason for trying plant-based meat.” 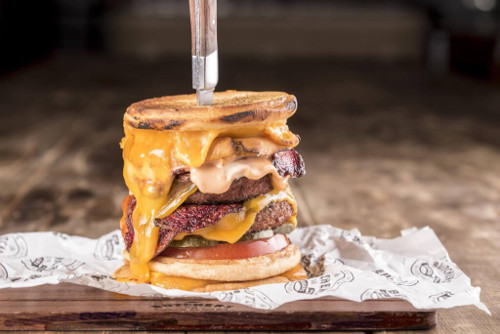 Yeung has worked with a number of restaurants, food service outlets, and hotels across the region to bring in more plant-based foods. The vegan diet, long regarded as an austere practice reserved for Buddhists, has caught on at places like Hong Kong’s Ritz-Carlton, which is now selling the burger, as is popular meat-based restaurant The Butcher’s Club, which says the vegan burger now accounts for close to 15 percent of total sales.

Yeung’s Green Monday campaign recently helped launch the Beyond Burger as part of a high tea service at Tea Saloon by Another Fine Day. Travelers can even find it at the Hong Kong airport now, too.

Impossible Foods, Beyond Meat’s biggest competitor in the vegan-burgers-that-mimic-meat market, also recently launched in Hong Kong to much success. The region is more than just a global expansion for these U.S. based food tech companies; it’s also serving as a showroom to the much bigger market just several miles north. While China is still increasing its per capita meat consumption as median income levels rise, the country has set targets to reduce meat consumption over the next several decades. A successful campaign in Hong Kong can catch the attention of major food distributors and businesses reaching the largest population on the planet, which would not only be huge for companies like Beyond Meat, but for the global food system, the climate, and countless animals.

Global expansion plans are key for Beyond Meat. While Hong Kong was its first international partner, it’s certainly not its last. The vegan meat producer recently launched in Canada and the UK and says it plans to reach 50 new markets within the next few years.