The Telegraph reports that the company has attracted a number of high-profile supporters, including the Mark Zuckerberg-backed private investment firm Iconiq Capital and Horizon Ventures which manages the wealth of Hong Kong’s richest man, Li Ka-Shing. Temasek a Singapore-based wealth fund that has invested in animal-free milk brand Perfect Day, is also an investor. Since its founding in 2011, Modern Meadow has secured nearly $54 million in funding.

“This is not about creating artificial leather. It’s about taking what we love about natural materials and being able to enhance them,” said Modern Meadow’s founder and CEO, Andras Forgacs.

New Jersey-based Modern Meadow’s revolutionary products are made in a lab because the company believes in “a future where animal products are animal-free.” The start-up’s new vegan material, made with a bioengineered form of yeast through a process similar to brewing beer, will possess a striking likeness, in terms of smell and texture, to animal hide.

“We have engineered a strain of yeast — like a cousin of what you’d use to brew beer — which can produce collagen through fermentation,” Forgacs told CNBC last March. “Collagen, which is found in animal skins, is the main biological building block of leather. We assemble it into a range of materials that become our ‘Zoa bioleather.'”

Lab-grown leather is far more efficient to produce than animal-based leather; while this new product takes only two weeks time from start to finish, producing traditional leather takes years – animals must be bred, raised, and slaughtered. Another multiple-week process is then required to process the skin and turn it into a usable product. Additionally, Modern Meadow’s bioleather can be made to any specified color, thickness, or texture.

Last March, Modern Meadow teamed up with Evonik Industries, a European chemical company. The partnership with Evonik will scale up production and make the Zoa bioleather products accessible to luxury designers, Dave Williamson, the Chief Technology Officer of Modern Meadow told CNBC. The company has been receiving hundreds of inquiries from designers in many industries, such as automotive, fashion, and sports, Forgacs added. 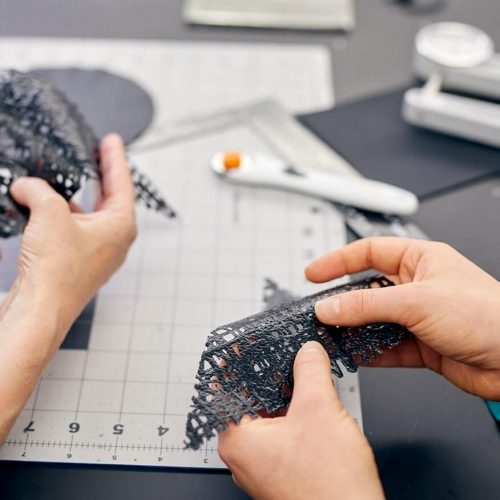 Modern Meadow has recently refined its technology, making it cutting-edge and more industrialized. Now, the bioleather is able to be brewed with large-scale commercial fermenting equipment, meaning the products will pass food and medical-grade standards.

The sustainable product company has already made its first mainstream appearance. Last year, New York’s Museum of Modern Art (MOMA) displayed a graphic tee made by Modern Meadow. Although intended for a short-term exhibit, the shirt is now on permanent display.