Singer-songwriter, actor, and vegan activist, Miley Cyrus, has shared fresh photos to her social media followers, showcasing her outfit and vegan “glow” at the 2018 Met Gala. Cyrus highlights how “Not killing animals is fucking hot! It’s so much cuter to NOT kill animals!”

The celebrity has been making headlines for her appearance at this year’s Met Gala, the first she has attended in three years. This year’s theme was “Heavenly Bodies: Fashion and the Catholic Imagination,” designed to open a dialogue between fashion and Catholicism masterworks. 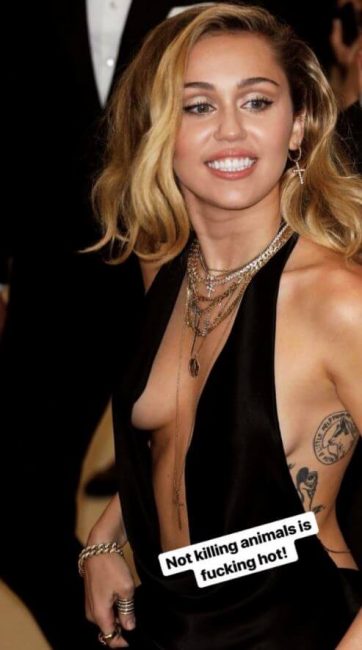 For the highly-anticipated gala this year, Cyrus donned a low-cut black dress from vegan fashion designer and her date for the night, Stella McCartney. The celebrity channeled vintage and timeless tones with the simple yet head-turning dress, paying homage to the theme of the night via her aptly-chosen accessories, most of which featured the cross, including her custom designed vegan shoes from MINK.

Also part of her look for the night were Cyrus’s vegan tattoos. Last year, she got the “Vegan Society Approved” logo inked on the underside of her arm, followed just months later by the words “Be Kind,” jotted on her wrists.

Speaking to Met Gala reporters, Cyrus explained her reasoning for attending the event: “I’m here, so excited to be a part of this because I think this moment can be about so many different things and for me, I want to bring a message, which is veganism and that there doesn’t have to be torture in fabulous fashion.” 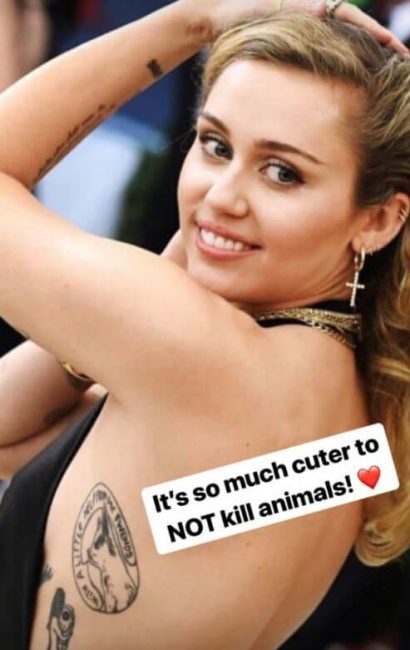 Cyrus is considered by many as an evangelist for the vegan lifestyle, notably due to her extensive efforts to shift the stigma around veganism away from negative connotations and into a compassionate, cruelty-free focus.

Last month, Cyrus released her vegan Converse x Miley Cyrus Collection in a collaboration with the iconic shoe brand that includes a variety of vegan footwear and clothing garments for “all ages and genders, shapes, sizes, and unique styles.”

Last year, the globally-renowned music artist received an award for being a voice for animals, she celebrated with a heartfelt post on Instagram discussing what she dubs “the vegan revolution.”