Vegan celebrities are lending their support to Animal Aid’s first-ever Summer Vegan Pledge. Mirroring the highly successful Veganuary pledge, the Summer Vegan Pledge is a free 30-day campaign that encourages everyone to try a plant-based diet for the month of June. The campaign’s A-list endorsers include  Lucy Watson of “Made in Chelsea,” MTV’s “Dirty Sanchez” star Mathew Pritchard, cricket legend Jason Gillespie, and others.

Animal Aid promises that all participants will be provided with all the help they need to commit to a vegan diet throughout the month, including a free welcome pack with recipes, nutritional information, and shopping tips. Those who take the Animal Aid Summer Vegan Pledge will also receive regular updates to stay motivated, access to exclusive social media channels for sharing tips with other participants, information on vegan events and special offers, and one-on-one coaching, if needed. 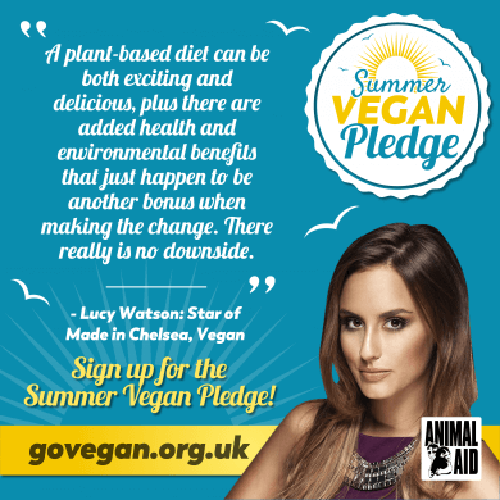 “I went from veggie to vegan after finding out how cruel the dairy and egg industries were, a secret that is kept well from the general public,” said Lucy Watson, a vegan since 2014. “As an animal-lover, I would never want to support any industries that involve animal cruelty. A plant-based diet can be both exciting and delicious, plus there are added health and environmental benefits that just happen to be another bonus when making the change. There really is no downside.”

“I went vegan purely because I have a huge love of animals, I disagree with factory farming and the cruelty they go through on a daily basis. I also decided to go vegan for health reasons and to help fuel my love of endurance sports,” said activist and vegan Mathew Pritchard, adding that he has seen “huge benefits” since changing his lifestyle.

Former cricket player Jason Gillespie, who went vegan nearly four years ago, added: “Going vegan is one of the best decisions I have ever made and I only wish I had done it sooner! I want to live in a kind and non-violent world, being vegan is a big step towards that.”