Vegan celebrity and animal rights activist Steve-O recently paid a visit to Outstanding Foods, where he was given a taste of the plant-based brand’s premier product, Pig Out Pigless Bacon Chips. The vegan chips are made from mushrooms that have been fried with savory seasonings. According to company co-founder Bill Glaser, the vegan pork flavor is so accurate that even omnivores who sampled the product believed that they were eating real pork. 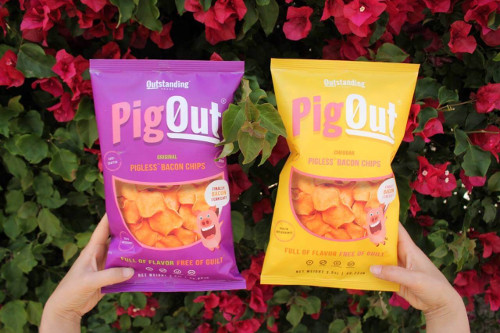 Earlier this year, Outstanding Foods announced its plans to bring its vegan Pig Out Bacon Chips to market this summer, making its product available on its website before rolling out into online market Thrive Market, followed by independent retailers. Although new, the vegan snack company has already attracted $1.5 million in investments from celebrities such as skateboarder Rob Dyrdek, Emily Deschanel, and Daniella Monet.

A vegan since 2008, Steve-O’s diet is not the only way he stands up for animals. In 2014, he executed his famous “SeaWorld Sucks” stunt, earning himself a charge for a traffic infraction. The very next year, another SeaWorld protest led to Steve-O’s arrest, but the vegan celebrity was unshaken, stating that his arrest was worth it due to the importance of protesting captivity.

During a trip to Calgary, Canada, Steve-O promoted how awesome vegan food is by showing off eats from local vegan food delivery service The Kind Kitchen. An animal lover at heart, Steve-O visited Peru earlier this year to help rescue street dogs, where he met Wendy, the German Shepherd in the photo, who he described as the “love of his life.”

Glaser promised that the company would announce additional celebrity investors later in the year, which begs the question of whether or not Steve-O, a vegan since 2008, is the brand’s latest A-list investor.