Following a change in scheduling, this year’s host is vegan actress Daniella Monet. She graciously stepped in for Kelly Osbourne, who can no longer attend. Monet is known for her work on various family-friendly television shows and films, including “Nancy Drew,” “Victorious,” “Baby Dady,” and several Nickelodeon television movies.

Monet will be joined by a number of other plant-based stars, including the evening’s honoree, Alicia Silverstone of the new hit television show, “American Women.” Silverstone has participated in a number of campaigns for Mercy for Animals, and she will be recognized for both her time and financial commitment at the gala. 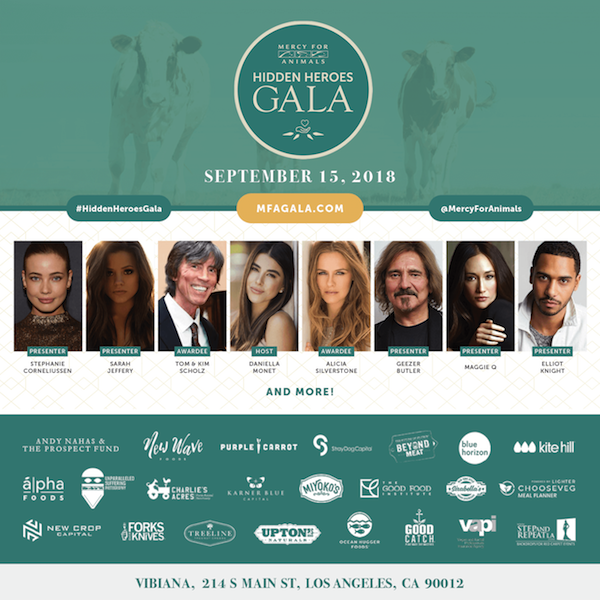 The evening will be packed with a red carpet program, cocktails, passed plant-based hors d’oeuvres, live performances, multi-course vegan dinner, awards program, and a silent disco after party – all taking place at the elegant Vibiana event space in Downtown Los Angeles. It is certainly a night of entertainment, but at its core, its purpose is not to celebrate the stars, but the undercover investigators who rarely receive recognition.

These “hidden heroes” sacrifice both their physical and mental wellbeing for the sake of justice. They go undercover inside factory farms, slaughterhouses, and other places of animal exploitation to film the atrocities and show the public the realities of animal consumption.

Their work has led to positive change within the industry, including new policies and regulations targeted toward animal welfare. These investigations have convinced major food industry leaders such as Tyson Foods, Costco, and Burger King to commit to purchasing cage-free eggs, and they have also paved the way for a new law in California to phase out driftnets in the commercial fishing industry.

Ari Soloman, Mercy for Animals’ VP of social impact, said in a press release, “Every day undercover investigators risk their safety to expose the routine cruelties inflicted on animals inside our nation’s factory farms and slaughterhouses. We’re proud to honor and celebrate the work of these courageous individuals whose bravery is leading to groundbreaking legal, political, and corporate change for animals.”

While there will be a number of celebrities in attendance, the gala is open to the public. Tickets are sold out, but to join the waitlist, visit the event’s website.